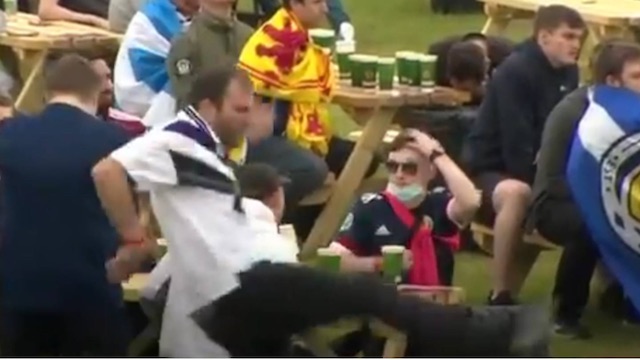 It’s been a tough tournament.

Scotland went crashing out of Euro 2020 last night after picking up one point against England and scoring one goal in their three games and this was obviously pretty disappointing for the Tartan army, who were experiencing their first major tournament football in the past 23 years.

I’m not really sure why Scotland thought they even had a chance at this tournament because on paper their team is pretty shit – and yes I know England have been quite crap so far, don’t @ me, we’re not talking about them yet – but I suppose it’s the hope and optimism that kills you isn’t it? Anyway, I don’t think Scotland’s tournament experience could havae been summed up any better than in the video you can see below, where an angry fan watching at a fan park tries to kick a table but ends up completely missing it and looking like a bit of a fool:

The next generation of #SCO players in training for #EURO2024

Watch the guy who tries to kick the edge of the table (and misses!)
👀 pic.twitter.com/itVhEVCqA3

Lol. I already made the obvious joke about that but thousands upon thousands of people have done similar as well on social media. It’s just too funny when the Scots were giving it the big one before the tournament. I suppose they have their one goal and 0-0 draw to take away and dine out over for the next quarter of a century at least. Don’t come home too soon next time.

For more of the same, check out this video of a naked Scotland fan doing the worm on the tube. I guess they’ve got that as well.