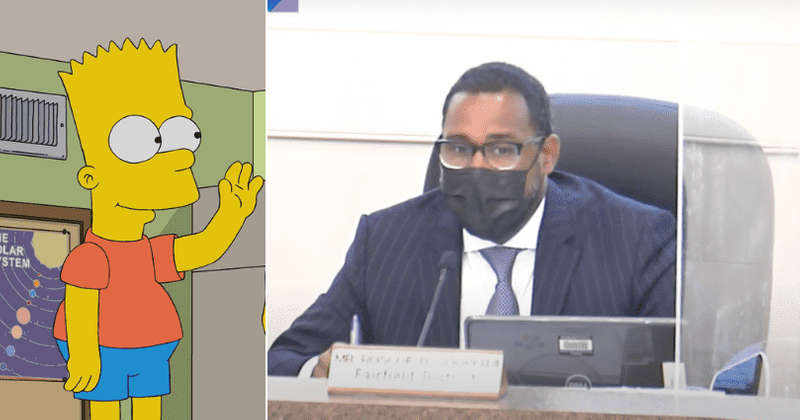 I think everyone would probably agree that one of the best moments from ‘The Simpsons’ is when Bart phones up Moe’s Tavern and gives him fakes names that he shouts out across the bar, but it’s been a while since anyone has attempted this in real life and managed to get away with it.

Thankfully though, some kids decided to give it one more shot at the Henrico School Board meeting over in Virginia and the main guy was forced to say a bunch of stupid names of supposed speakers through his microphone only to never have them show up. We were treated to ‘Phil McCraken’, ‘Souk Mahidick’, ‘Opheleum McCock’, ‘Eileen Dover’, ‘Don Quidick’ and ‘Wayne Kerr’ before someone realised that they were all fake names and they were doing it for the lolz.

It’s great watching this guy say all those names and the eerie silence that permeates the mostly empty room as those in attendance try to stifle their laughter. 10/10 video:

Some kids pranked a school board meeting on some Bart Simpson shit and I am crying!! 😭😭😭😭 pic.twitter.com/c9fX3GbejA

You do love to see it don’t you and I’m not ashamed to say that I was cackling like a little kid all throughout that. You have to question how the dude didn’t realise almost instantly that someone was pranking him, but I suppose this did happen three hours into the meeting so you gotta give respect to the kids for knowing the best time to strike. They just keep getting smarter don’t they?

For more of the same, check out Hank Azaria apologising to every Indian because of Apu. Fair enough really.