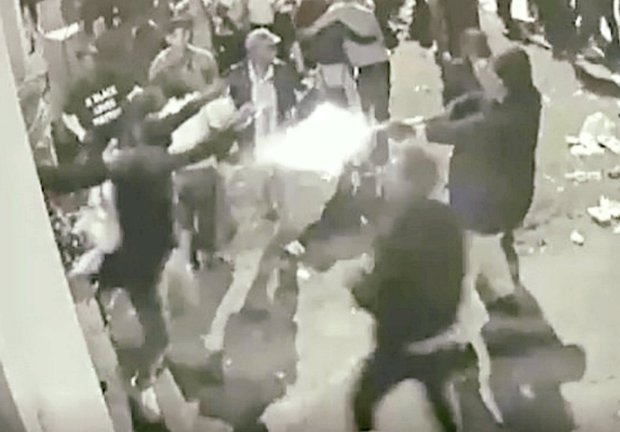 Normally when you go on a night out, you might expect to see some rowdy drunk boys having a bit of a scrap outside the club at the end of the evening, but you don’t expect to see someone whip out a sawn off shotgun and fire it at someone.

Well, that’s exactly what everyone who attended the Nite Trax club in Leeds on August 29th 2016 were subjected to, as three men launched an attack on an unnamed 42 year old outside the club. He was shot at point blank range with a shotgun and then assaulted with knives and a machete, yet somehow managed to survive the assault.

The three men have now been jailed for a total of 56 years due to their part in the crime. They have been identified as Kemar Ricketts, aged 29, Seion Allen, aged 33 and Shaquille Liddie, aged 24. Liddie was the gunman and received 14 years in jail, whereas the other two plead guilty to attempted murder and both received 19 years.

You can check out footage from the attack below:

Jesus that was pretty rowdy eh? Definitely not what you want from a night out on the town. Really scary stuff.

DCI Jim Griffiths summed it all up really:

This was an absolutely appallingly violent attack and it is only by sheer chance that the victim was not killed.

These men armed themselves with a sawn-off shotgun, a machete and a knife and shot the victim at close range in a targeted attack that we have never been able to establish the basis for.

The whole incident was captured on CCTV and it shows just how busy the area was with people enjoying the evening at the time and the obvious risks there were to others.

A woman who was an innocent bystander received slash injuries to her leg during the attack.

It took a very lengthy and protracted investigation into the circumstances to identify the men responsible and bring them to justice.

We hope the significant sentences they have received will send a clear deterrent message to others about how seriously offences of this nature will be treated and the heavy penalties that people can expect.

Guns have absolutely no place in the hands of criminals in our communities and we will continue to do everything we can to tackle firearms crime and protect people from the risks that violent offenders like these present.

Yeah, good thing these guys are going away for a long time. Hopefully our club nights are going to be safe again after that, although judging from this gunfight in London recently it doesn’t look like it’s getting too much better any time soon.