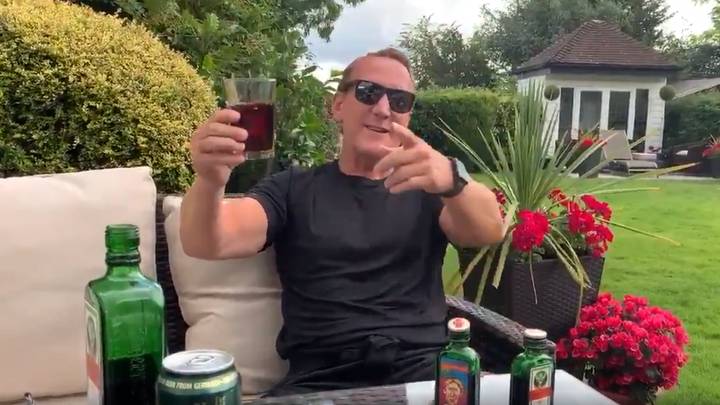 It’s normally pretty rank doing a Jagerbomb at the best of times, but it’s gonna be even rougher if you swap out the Red Bull/energy drink for more Jager – this isn’t stopping former Arsenal legend Ray Parlour though.

The Romford Pele was toasting the pubs being back open next weekend and decided to sign off from his little series of videos where he’s drinking in his garden in style, by necking a Jager Jager. It looks like he’s downing almost half a pint of the stuff, which judging by the way it went down was probably about as nice as it looked:

Alphabet 💣 is a J for the birthdays. Going to go out on a high. Jäger jäger. Apologies if I missed anyone out. Could be a 1 man party after this 🥳🍻 pic.twitter.com/M98ggsVSIO

Yeah, don’t really know why he chose to do that, but I guess it’s got people talking about him so it’s achieved its goal in that respect. Not sure how many people will be following his lead when we can go back in the pubs next weekend though, or even how many people will be heading back to pubs come Saturday – sounds like it’s going to be absolute carnage and impossible to maintain social distancing measures, so I’m probably just going to give it a miss.

For more Jagerbombs, check out these guys who drank 85 Jagerbombs on a session once. How is that even possible?