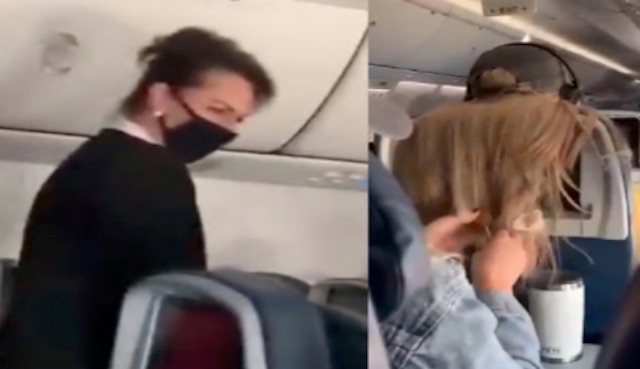 I don’t think I’ve ever been in a position on a plane where the passenger in front of me has dangled her hair over my screen so that I can’t use it for the duration of the flight, but I would like to think if I just pointed this out to them then they would gladly move it out of the way rather than continuing to cover it the whole time.

Seems like this isn’t what happened in this altercation on a recent plane journey though and the person sitting behind was not happy about it at all. She proceeds to stick a load of gum in the guy’s (I think it’s a guy bc he’s wearing a baseball cap and there’s a bit where he turns around and it looks like a guy, but I could be wrong) hair and scrunch it up real good, before dipping it in her coffee as well to make sure it sticks there for ages.

All the while he keeps flicking it out so it continually covers her screen, so I can’t even feel sorry for him because he’s being a major asshole here. Have a look and see what you think:

Yeah, no denying that this guy deserves everything he’s getting here with his actions. Kinda a shame that the video doesn’t keep going because I would love to see his reaction when he finds out what’s just happened to him. Can see him probably having a massive meltdown.

For more of the same, check out this plane fight between two drunk Brits refusing to wear masks. Of course.