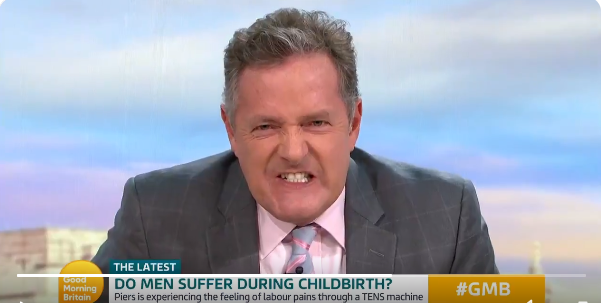 The footage we didn’t know we needed.

It’s well known that the pain of childbirth for women is absolutely immense and something that no guy could probably ever imagine themselves, so who better to test out a machine that simulates it on live television then the most universally hated man in the country Piers Morgan?

Morgan was appearing on Good Morning Britain again today when he volunteered to be hooked up to a TENS machine that shoots electric pulses through the body and simulates the process of childbirth. I don’t really need to say anything about this video as it inevitably involves Morgan being in a lot of pain which I’m sure is the main reason that you decided to click on this article:

Lol what an absolute pussy. I mean I’m not saying that I would be able to last longer or think that I wouldn’t find it absolutely horrific if I was hooked up to that machine, it’s just great to see someone like Morgan finally get a taste of his own medicine and have to deal with a whole lot of pain and wus out at the end of it. Great to see Susannah Reid thoroughly enjoying herself as well.

In fairness to the guy, after this segment he did offer his apologies to women for stuff he may have said in the past regarding childbirth:

On balance, for the women of Great Britain, I probably owe you a slight apology.

I’m very glad that we don’t have to go through this. I’ve got to say, that was agony. If that is what you honestly go through then my respect for women in terms of childbirth has gone through the roof.

That was painful. I’m never again going to joke about childbirth.

Nice. Now if only there was some way to make Morgan experience everything else he’s a twat about for no reason from the other side’s perspective and maybe he would be on the way to being a halfway decent human being. Doubt that is ever going to happen realistically though. The second part I mean.

For more of the same, check out Piers Morgan getting a cream pie thrown in his face. Jokes.