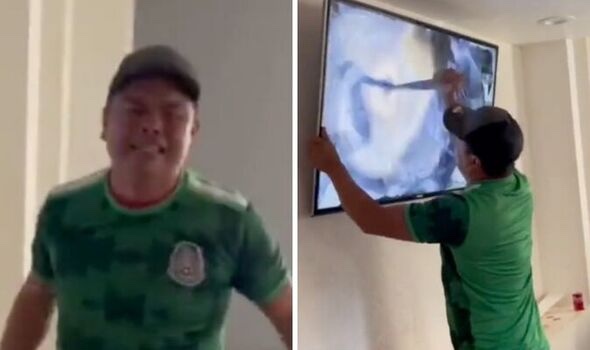 I don’t care what you say about Qatar, this World Cup has been a lot of fun so far with several of the big boys packing their bags and heading home early. You love to see it.

Not sure if Mexico can be counted in that category as they’ve never really been that good on the international stage when it comes to the World Cup, but I suppose you wouldn’t have put it past them to qualify for the knockout stages in a group with Saudi Arabia, Argentina and Poland. Pretty much a straight shootout between them and Poland on paper and that’s sort of what happened a couple of days ago after Poland hoped and prayed that Mexico didn’t score another goal against Saudi Arabia to send them through.

It made for some great drama but unfortunately it wasn’t to be for Mexico after the Saudis scored a late consolation goal. Obviously this was absolutely devastating for everyone in Mexico, but one guy really took it to the extreme by attacking his television with a knife and stabbing it until it no longer worked.

Wow. That really is passion right there, although I still find it kinda bizarre how someone can get so worked up about something like this, especially when their team is dogshit anyway. Surely this guy/all Mexicans can’t have thought they would actually go far in this tournament with their terrible team? Reign it in guy and set better expectations.

For more of the same, check out these MLS fans attempt to be hooligans. Really embarrassing.