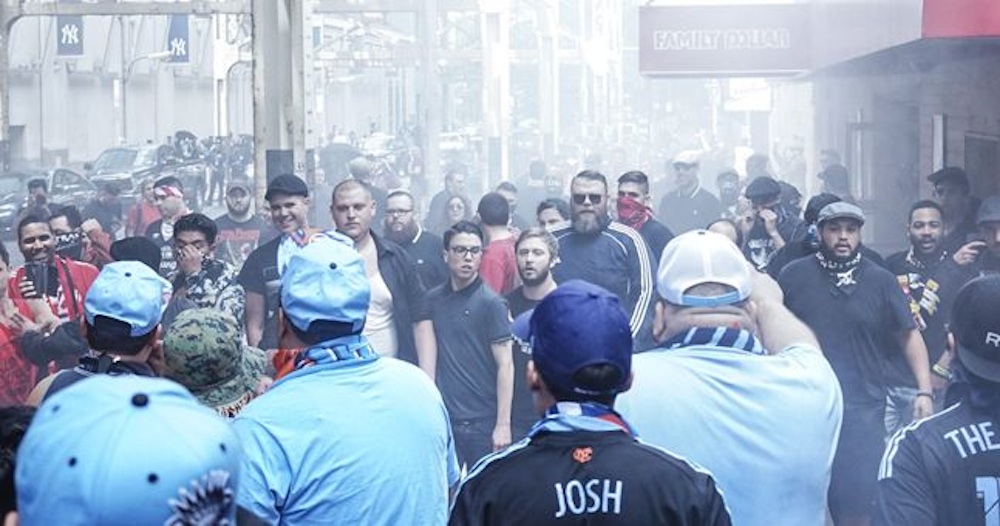 MLS has finally inherited the ugly side of the beautiful game.

The popularity of MLS seems to have increased exponentially over the past few years but this latest video won’t do the squeaky clean image that they’ve been promoting any good, as it seems like as well as inheriting the beautiful game they’ve also received its ugly side too. Yes, the hooligans have landed.

MLS probably thought it was a good idea to have two teams in the same city because it could promote exciting derby matches which undoubtedly have a great atmosphere, and also get a whole bunch of new people into the sport as well. Unfortunately everyone knows that derby matches also lead to the worst violence and this was evident over the weekend in the run up to New York City V New York Red Bulls.

Clearly these fans had watched Green Street or The Football Factory one too many times and were desperate to recreate the actions of their idols, taking to the New Jersey streets and smashing everything up and fighting each other. In the clip below the police eventually come and break it up, but it’s actually pretty brutal and intense fighting, with loads of stuff being thrown at each other and someone even whacking someone else in the head with a billboard. And this is for a team that has only even existed for about a year!

Absolutely insane behaviour, and although watching hooligan fights is kind of cool I’ve got to do the responsible thing and say that I hope that this is the last we’ll see of this kind of stuff. If we want to watch hooligan fights then we can just head over to Russia and watch them legally and endorsed by organisations and put on TV for our viewing pleasure. They’re way more brutal than these ones too.