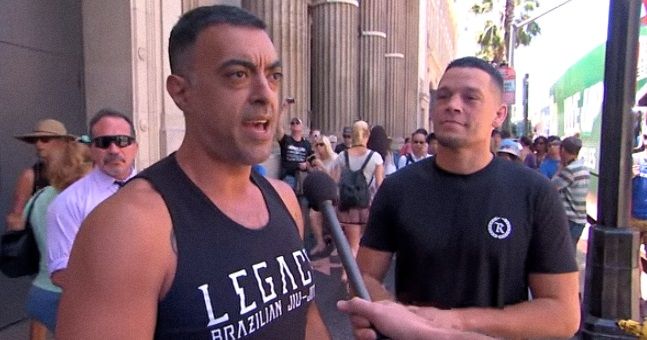 Watch these chumps shit their pants.

UFC 202 and the rematch of the century between Conor McGregor and Nate Diaz is only a couple of weeks away, and despite the fact that it doesn’t really need it, the UFC is going all out with Nate Diaz to try and promote it.

Diaz has already appeared on Conan and last night he showed up on Jimmy Kimmel for a segment called ‘What’s Up Nate?’ This basically involved him standing behind a bunch of Conor McGregor fans talking shit about him, then bumping into them and watching them shit their pants when they realised he had been listening to them ragging on him. Highly entertaining.

That guy at the end had to be a plant right, surely there’s no way they could find a big enough of a chump is there? Crazy that Nate Diaz could actually be funny and call him out as Austin Powers too. Shit, I better check he isn’t standing behind me there.

Remember when Nate Diaz dissed Justin Bieber though? He just doesn’t give a fuck.