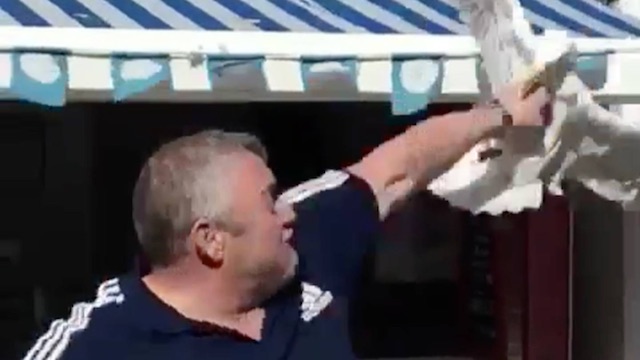 Everyone knows that seagulls are absolute pricks who always try and steal your food and get in your way and just generally piss each other off but they’re normally so quick at flying off that you can never really exact any kind of revenge on them.

Bearing that in mind, it’s great to see the following video of some guy who definitely doesn’t look like he would be the fastest punching a seagull in the face when he notices it swooping down and trying to steal his delicious prawns. Take that you bastard:

That is completely sick to be fair. The guy doesn’t even flinch and acts like it’s the kind of thing he does every day. Obviously it’s not cool to punch animals – or anyone – but I think we can make an exception when the seagull was being its usual obnoxious self and trying to steal the dude’s food. Self defence, right?

For more of the same, check out when a seagull flew away with a man’s tongue after a woman had bit it off. See what I mean about these little assholes?