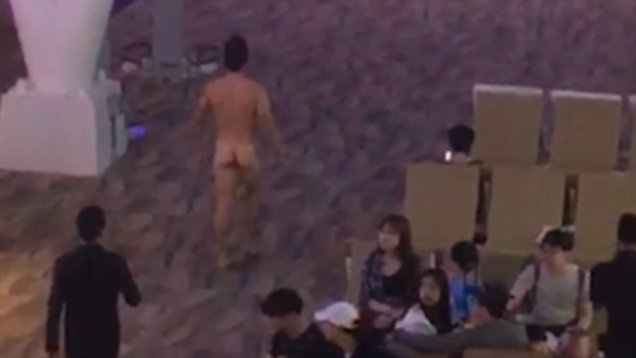 Like so many things though, it turns out that I was completely and utterly wrong about this and it is possible to overdose on viagra and it makes you do some truly mental things if the video below is anything to go by. It’s taken from Phuket airport in Thailand where a 27 year old guy from New York named Steve Cho is marching around naked and chucking his own poo at passersby. He blames this on a viagra overdose.

Here’s what one airport customer had to say about the incident, the video of which you can also see below:

This was the scariest and most disgusting thing I ever saw at an airport.

I stayed away from the man in case he attacked anybody.

The airport staff tried to make him calm down. They were talking to him but he ignored them.

It was very bad. The airport did a good job to control him.

Yeah I mean it doesn’t sound or look very good there, does it? Would probably also be genuinely terrified if someone was doing that whilst I was in the airport too. Never ever going to take anywhere near that much viagra in my life ever.

As for Cho, he was arrested and taken to hospital to be examined by a medical officer. Once he came around, he admitted to taking way too much viagra and promised to reimburse any damages. I assume he was allowed to go back to New York too, but probably missed his flight. Let that be a lesson to you.

For more of the same, check out this naked man with a huge afro going on a rampage around the San Francisco subway station. Drugs huh?