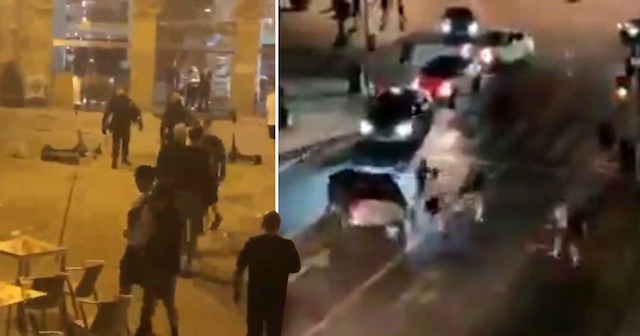 Football fans are so stupid.

It’s the biggest game in club football tomorrow night as Manchester City prepare to square off against Chelsea in the Champion’s League final, so obviously some idiots have decided to fly over to Portugal before the game and start beating each other up in the street.

There’s loads of clips of violence erupting between the two sets of supporters late last night before the cops jump in and beat the living shit out of both of them. Here’s the best clip of that that I can find:

Jesus. Those cops were not screwing about were they? Kinda feel like their reaction was a bit over the top for what was going on, but I suppose it’s best to just nip this stuff in the bud and show these guys what’s going to happen if they start causing trouble to make sure that they don’t.

Seems inevitable that some morons are probably going to end up fighting whatever happens though. Just the mentality of some of these people sadly.

For more of the same, check out these Coventry fans pelting a couple of dudes with bottles. Really quite terrifying.