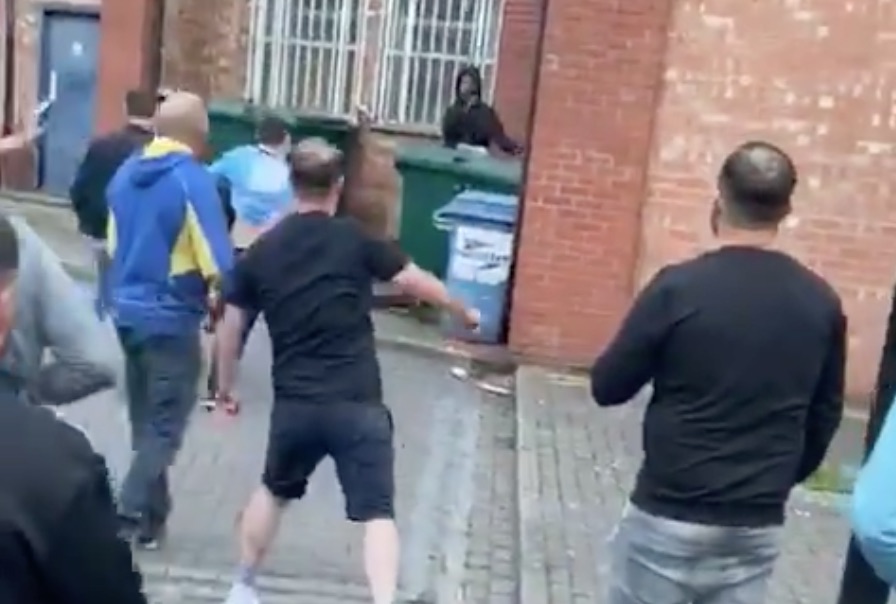 More racism in the UK.

An overarching theme of the Black Lives Matter movement I’m seeing in this country is that racism doesn’t really exist over here, so I think it’s important to keep highlighting that it most definitely does by sharing videos like the one that you can see below.

This one comes from Coventry and shows a massive crowd of football hooligans – I guess celebrating because Coventry won promotion from League One yesterday after the league voted to end the season early – but doing so by chasing a couple of black guys and pelting them with bottles. Why is this happening?

who’s from Coventry that can explain what happened here?
pic.twitter.com/IdPQSp2tJs

OK, so the guys in the video are saying that the black guys have got a knife or something, but even so the sight of all those people baying for their blood and throwing bottles at them – even after the police have stepped in – is a pretty creepy and eerie sight that is implicitly racist in its actions. Even if the two black men are guilty, the mob mentality isn’t the way that these situations should be being handled – there are just too many negative connotations and it undermines the rule of law too much in the current climate.

The police stated that they were fully investigating the incident and that they had recovered a knife from a bin later on. There isn’t any evidence at this point that it belonged to either of the two black kids though and a video posted by one of them seems like they don’t have any clue about knives or why they were targeted. It also seems like two of the members of the mob are clearly holding knives as well?

Those lot are saying the two black men had knives and stabbed two people. But no one was stabbed and none of them had knives on them. The police just helped them out to safety & told them this. UK is just racist af pic.twitter.com/LAofo4vytE

Man is basically holding an offensive weapon n nothing happens but the 2 black lads who were the victims get put in handcuffs; I don’t know if I should laugh or punch thru the wall rn cuz this is some joke pic.twitter.com/lQwUBFRV2i

I mean that video isn’t edited that well and could easily be hiding something else that the kid said, but even so I don’t think that the top video is the way that people should be handling incidents like this and you can’t really deny that it’s racially motivated given its nature. Take a look at this video from Coventry on the same day if you think that racism doesn’t exist up there:

people saying there was “no racist intent”… what’s this then? pic.twitter.com/qhEmA2LYeY

Says it all. Please do better – here’s the full police statement which has just been released as well:

Seems fairly clear from that that the two black kids might have been the kids brandishing the knives or they quite easily might not have been as well. Either way, the actions of the people in the video undermined the rule of law and prevented the police from doing their job, and it’s clearly a racial issue as they identified the two black kids by the colour of their skin, regardless of whether or not they were actually the ones carrying the knives.

On top of that there are also racial slurs in the original video. If you think race has nothing to do with this incident, then you need to get educated.

For more of the same, here’s a racist confrontation with Black Lives Matter campaigners in the town of Hoddesdon. Gross.