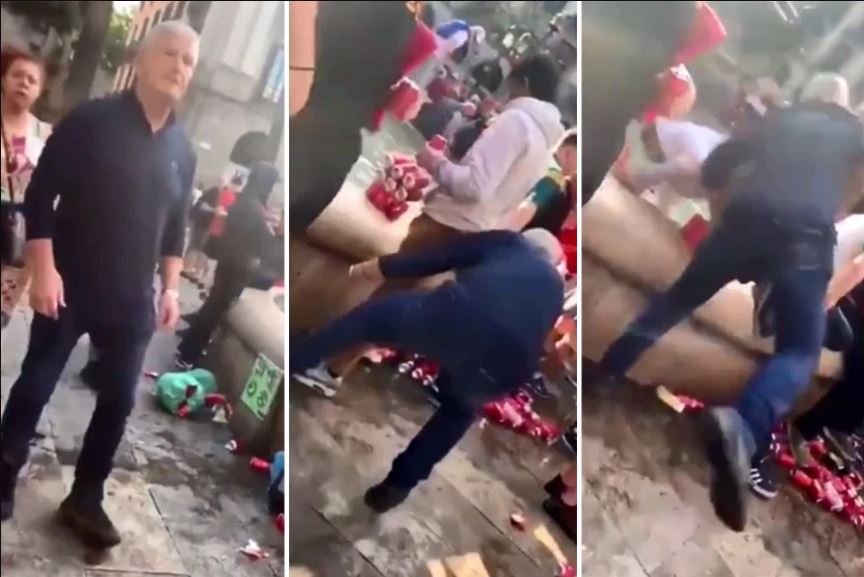 Champion’s League matches should be great occasions when football fans get to travel to other countries, soak in the culture, drink a few beers and hopefully see an excellent football match and have a good time, coming home celebrating the victory.

Unfortunately, for many British travelling away fans they only really do the drinking a few beers part of what I just described above and then spend all their time wandering around drunk being complete twats. This is epitomised in the videos of some Liverpool fans in Barcelona below who are clearly massively pissed up and decide to push some locals into the fountains of the city, which is perfectly normal behaviour I’m sure you’ll agree.

The first one is the worst as they even racially abuse the guy afterwards by calling him Mr Miyagi because he’s oriental:

Assaulting an innocent old man then racially abusing him.

What a bunch of idiots. It’s so embarrassing that even Liverpool’s chief executive Peter Moore has desperately called on fans to stop pushing people into fountains and being dickheads whilst they’re out in Barcelona:

We proudly sing that we’ve conquered all of Europe.

But let’s treat this beautiful city with the respect that it deserves, and act in a manner that is befitting of LFC.

By all means have a good time, but we are Liverpool, and as such, let’s visit here with grace and humility.

The absolute state of that. Really makes you embarrassed to be a football fan when you just see random knobhead acts like that going down that aren’t even funny. I’m all for throwing people in fountains and getting them wet, but you can’t really go around sneaking up on people you don’t know and doing it and expect to

For once maybe any Liverpool football fans in Barcelona reading this (doubt there are many) could do the whole country a favour and not act like complete and utter mongrels for once? Our reputation out over there is hardly the best, so don’t make it any worse, yeah?

For more of the same, check out these Liverpool fans getting beaten by Roma fans last year. That wasn’t so good either.