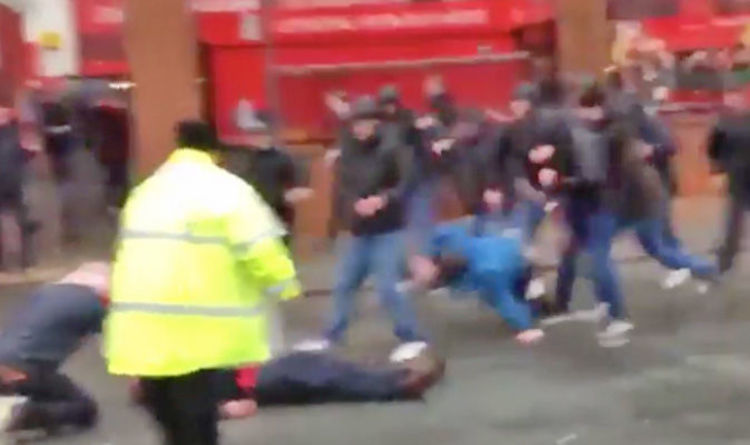 Last night saw what should be remember as another excellent European night at Anfield, as Liverpool managed to dominate Roma and beat them 5-2 in an entertaining encounter – although the gloss was taken off it slightly by the fact that they conceded those two late away goals.

Liverpool is well known for its insane atmosphere before big Champion’s League nights – it was only a couple of weeks ago that Manchester City’s bus was attacked on its way to the stadium by fans – and this prompted manager Jurgen Klopp to urge the fans to show respect to the visiting Roma fans. Unfortunately, it seems that this wasn’t respected by either set of supporters as some ugly scenes before kick off marred the game.

You can’t really tell what’s going on from this first video from ITV reporter Gabriel Clarke – it’s just a bunch of fans running at each other – but there are several reports coming in that Roma fans attacked Liverpool fans with belts and batons and this is confirmed in the second video. They seem to get into a ruckus with Liverpool fans who chase them off by throwing bottles and cans at them.

Damn. One man is still in critical condition after being stabbed, with two Italians having been arrested in connection with the crime: We’re all hoping that the injured fan pulls through and really have to ask the question yet again of why this is still happening in 2018 and nothing is being done about it?

Roma fans have a bad reputation as well having been involved with violent incidents pretty much every time they play an English club – why hasn’t anything happened to them yet for this? Liverpool fans shouldn’t go around attacking team buses either, but at least they’re not stabbing people and attacking them with belts. Just fucking watch the game and enjoy it and don’t attack everyone, how about that?

For more of the same, check out six of the most brutal videos of fan violence from Euro 2016. Awful.