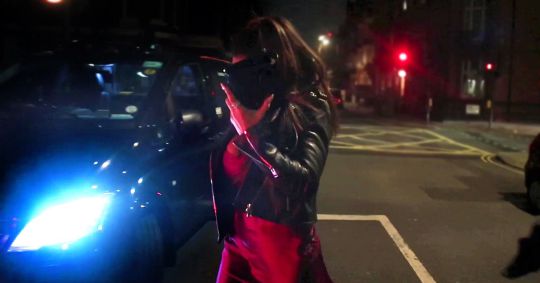 Katie Price seems to be in the midst of a full on breakdown with the news that she’s set to be declared bankrupt overshadowing her every move at the moment and her wild actions presumably being a direct result of this.

Not content with being arrested for drunk driving yesterday, another video of her being a bit out of control has also emerged. This one comes from last Friday outside swish Mayfair club Annabel’s – where you should definitely be hanging out if you’re about to be declared bankrupt – as she’s walking to her pink Range Rover that’s being driven by her boyfriend Alex Adderson.

Ever one to invite the papparazzi, as she’s being snapped by them Katie loses her cool and yells at them that she hopes their wives die. Brutal:

I mean that isn’t really that bad is it but it does beg a couple of questions, like why were they getting a taxi back to the car only to drive off? And who goes out to a club and doesn’t drink and then drives home? Why would you drive a pink Range Rover everywhere if you weren’t craving attention? Why did that dumb paparazzi guy fall over at the end?

Even though this isn’t that bad though it seems as though Katie isn’t really that concerned about her bankruptcy or anything but the reality seems to be that she’s having a full on meltdown about it. Hope she manages to sort herself out before something bad happens, because all the warning signs seem to be there.

For more of the same, check her out rapping about cocaine in some random dude’s bedroom recently. Breakdown.