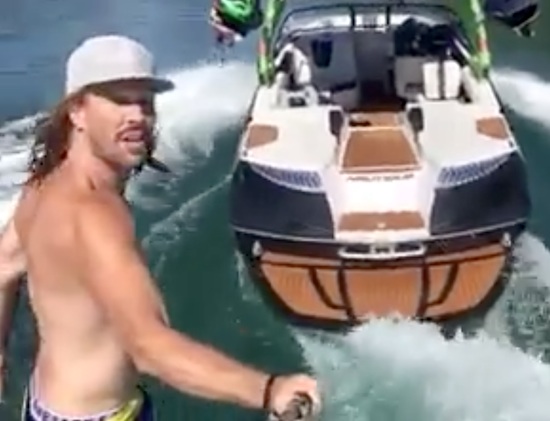 The act of ghost riding your vehicle involves leaving it running whilst you go and do something else.

Normally you’ll have a remote kill switch or someone else will be in it to make sure that it doesn’t speed off on its own and crash – which is highly likely – rendering it completely worthless and probably costing you thousands of pounds. Not something you really wanna do just to look cool in front of your mates or for a viral internet video. There’ a lot of things that could go wrong.

Nevertheless, this dude thinks it’s a good idea to leave his $135,000 boat riding along a lake whilst he surfs in its stream with a selfie stick making a video. To be fair it does look pretty badass but I think the video would probably have been better if the boat ended up speeding off and leaving him in the middle of the lake before it crashed into a wall or something:

A lot of people are calling bullshit on this video and even though the dude in it doesn’t look like the sharpest knife in the drawer, I suspect someone is probably hiding on the boat or he has a remote kill switch in his pocket or something. There’s no way someone would do something like that without some kind of back up right? There’s so many things that could potentially go wrong.

For more reckless behaviour, watch this.