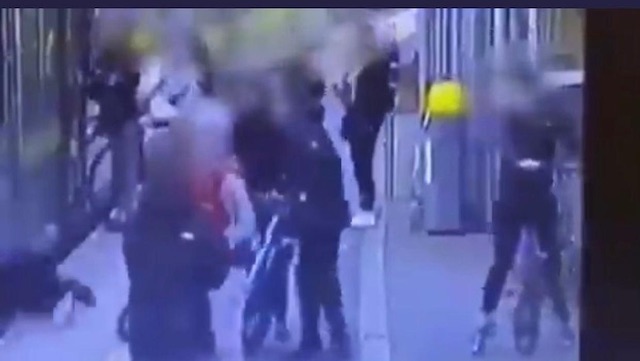 It’s so sad and depressing when you see footage like the video below, where a gang of gross teenage boys are hanging around at a train station and just starting on anyone that walks past them for the sake of it, with many of those being young girls that are quite rightly scared shitless and can’t defend themselves.

The video comes from over in Ireland and the worst two parts are when one guy on his bike kicks a girl in the face for no reason as she runs past to get the train, and then a couple seconds later another one of them gets in the face of another girl, causing her to trip up and fall in between the train and the platform somehow. Fortunately it looks as if the train guard/driver spotted this and didn’t pull off, but even so it’s a completely shocking and awful experience for her to have to go through and these kids in the video are clearly absolutely horrendous human beings:

OK so in fairness to the one kid he does look fairly devastated when the girl falls between the platform edge and that might mean that he isn’t a complete and utter prick, but even so he’s definitely a bit of a wrong ‘un for even engaging in this sort of behaviour in the first place.

The attack took place at Howth junction over in Dublin. I’m not sure if the boys have been identified yet, but Twitter is doing its thing so it probably won’t be too long. Hopefully they can get arrested and educated that acting this way isn’t right, but it seems kinda unlikely given what we all know about the prison and police systems. Guess we’ll see.

For more of the same, check out this gang member who said that the government made him attack R.Kelly in jail. Ok then.