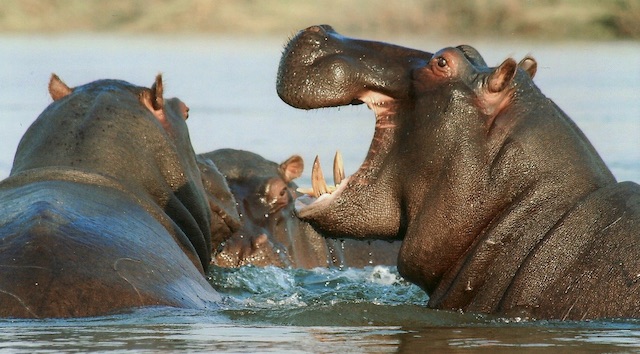 These guys are bastards.

Hippos are kind of seen by the general population as fairly loveable animals, but ever since I heard a story about how one managed to swallow a guy whole before eating his arm and spitting him out, I’ve always thought they were complete and utter bastards and this video proves it again.

Hippos are unbelievably responsible for 3000 deaths a year in Africa, making them officially the 2nd most dangerous animal on the continent (mosquitoes are super far ahead with 1 million) and you can see why in the video below, where one of the bastards chases a speed boat whilst a tourist films it. Kinda seems a bit non fussed about it all when I would probably be absolutely bricking it if I saw this dude flying down the river directly behind me.

How the heck can a massive bastard like that hippo keep up with a speedboat? I’m telling you, they’re way more dangerous than we’ve been led to believe. Don’t be fooled and raise awareness.

Really has been an eye opening day for me today having seen this video of how gigantic moose are as well. Absolutely outrageous.