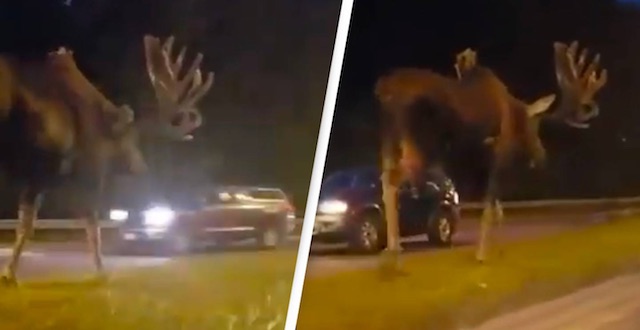 Much bigger than expected.

Not sure how you spent your bank holiday weekend, but one video that kept coming up over and over again when I was doom scrolling was this one with a giant moose strolling down the highway over in Canada.

And let’s not beat around the bush, when I say giant I mean absolutely gigantic, clearly dominating a massive SUV car in the video below that doesn’t look like it’s been tampered with digitally. I’m gonna be honest and say that I always thought a moose was probably around about the average size of a horse or something and so to see how they’re actually humongous monsters has completely blown my mind, as it has done to many other people.

Needless to say, they were all 10/10 shocked about how massive they could become with some of them even comparing them to dinosaurs. Take a look at the footage yourself and see what you think:

I don’t know how big I thought a moose was, but this was not it 😳 pic.twitter.com/YyqaCC5jdA

Moose running across the water pic.twitter.com/K2EBOOaHDA

I don’t know how big I thought a moose was, but this was not it 😳 pic.twitter.com/YyqaCC5jdA

What the actual fuck? Moose are clearly the dominant species on the planet and I don’t ever want to come anywhere near one because it seems like they would have everything they needed to absolutely destroy me. And would probably want to do that as well. Not for me.

For more of the same, check out this moose smashing through the front of a coach and stopping the mileage at 666.6. Spooky.