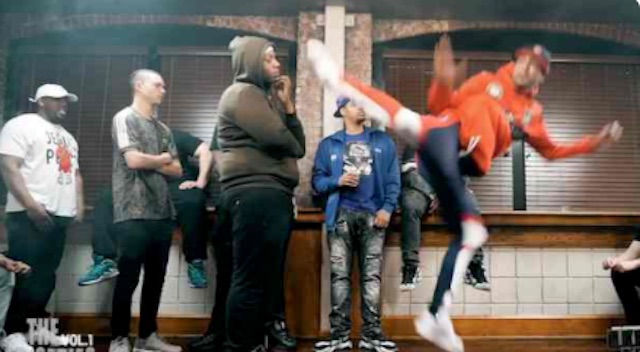 I hadn’t really considered how the battle rap game might have been affected by the Coronavirus outbreak this year, but like most industries it looks as though it’s taken a massive hit.

Thankfully, there’s still a load of content left on the internet that we can still check out and that’s how we came across this old battle between Lootchi and Bubba Forde which sees Lootchi lay a sweet chin music on Forde as part of his verse. He starts off rapping about Bret Hart and Shawn Michaels and then boom, outta nowhere (the first clip has that bit but you can watch the whole battle on the second one):

OK, so he didn’t actually connect with him but you’ve still gotta admit that’s a pretty sick move to bust out in the middle of a rap battle. Probably cooler that Forde didn’t even flinch when he did it though and then proceeded to come back out and spit some sick bars at him afterwards, although Lootchi did go on for fucking ages before Bubba’s turn came up so he probably had a bit of time to compose himself.

Kinda weird they don’t declare a winner either but I guess maybe they’re trying to be more inclusive and about the game rather than the victory nowadays or something? Or maybe it just got cut off?

For more of the same, check out this battle rapper ruining his opponent’s life by exposing his cheating to his fiancee in the crowd. Ouch.