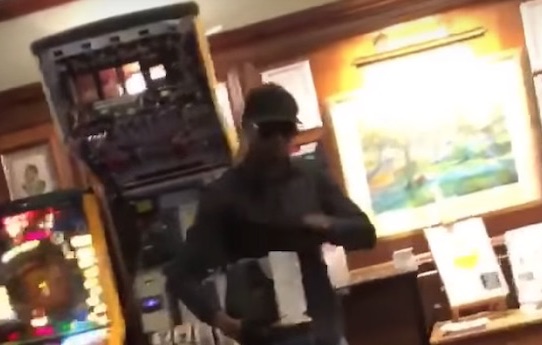 Absolutely no fucks given.

I’ve stolen a couple of things in my life and in general my tactic was to wait until as few people as possible were watching and then slip it in my pocket and walk out of the shop.

I think that’s a pretty legit tactic for this kind of stuff but according to the video below it doesn’t even matter if people are watching you these days, you can just be as brazen as you want about it and nobody is going to stop you. It’s taken from a Wetherspoons somewhere where a guy just casually walks in, jacks a fruit machine and steals all the money whilst everyone around him just keeps drinking without even batting an eyelid.

I mean hell, the guy filming this video just filmed him and didn’t give a shit either! Really is something else:

And what? That’s a mic drop moment if ever I’ve seen one – in and out, get the cash, see ya later. I don’t advocate theft but I’ve gotta say that’s an impressive operation. Love the way he didn’t even bother to really disguise himself either. Absolute killer.

For more of the same, check out this guy who is literally the dumbest criminal in history. Not a patch on this guy.