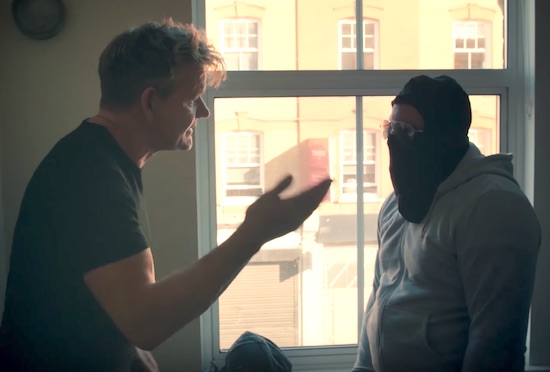 Gordon Ramsay’s new show ‘Gordon Ramsay On Coke’ has attracted quite a bit of attention – mainly because the name implies that it’s going to involve watching Ramsay be even more abusive than usual after hoovering up a line of the white powder – but it’s actually turned out to be a fairly informative documentary with Ramsay doing his best Ross Kemp impression pretty well.

If you haven’t managed to catch it on ITV and don’t want to watch it on catchup, the channel has kindly allowed some of the best parts to play out on the internet, and the video below is one of these. In it, Ramsay goes to meet one of London’s cocaine kingpins, who even lets him hold £140,000 of the good stuff whilst he’s interviewing him:

Lol there’s quite a lot that’s funny about that, but I think my favourite part is that end shot of someone cutting some meat in slow motion that lingers on for way too long. It’s really jokes when he’s bricking it out about meeting the dealer too, even though it’s probably just some producer in a mask. Standard fare for these shows though isn’t it – see Ross Kemp, Danny Dyer etc. Always worth tuning in though.

For more Gordon Ramsay, check out out rinsing amateur chefs on Twitter. Must be bored.