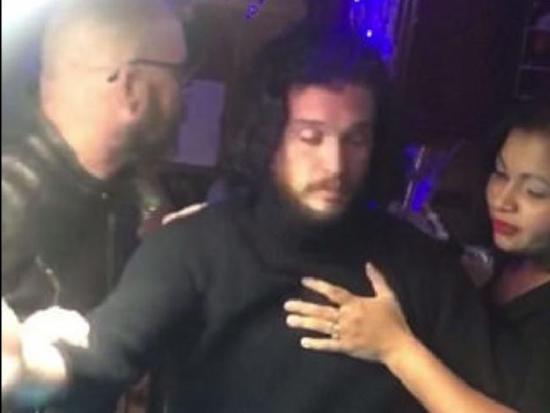 Being famous and having loads of money obviously has its fair share of perks, but it’s gotta be really annoying when you’re just trying to hang out at a bar and have a good time and everyone is bothering you for pictures and conversations etc.

This seems to be exactly what happened to Kit Harrington – better known as Jon Snow from Game Of Thrones – over the weekend. He was quietly minding his own business playing pool in some dive bar somewhere when everyone was hassling him and getting all up in his face, to the point that he was eventually thrown out of the bar for being ‘drunk and disorderly’.

Whilst Harrington might have been a little wasted, he doesn’t strike me as being that messed up and it seems like it’s everyone else is getting excited by his presence. Think he was a little hard done by myself but if you watch the video below then you can make your own mind up about it:

Yeah I’m not really sure he was being that much of an idiot there that he deserved to get thrown out of the bar. Definitely think he got stitched up there – I suppose that’s the price of fame though.

For more of the same, check out when he got offended because people were talking about how good looking he was rather than his acting skills. Ouch.