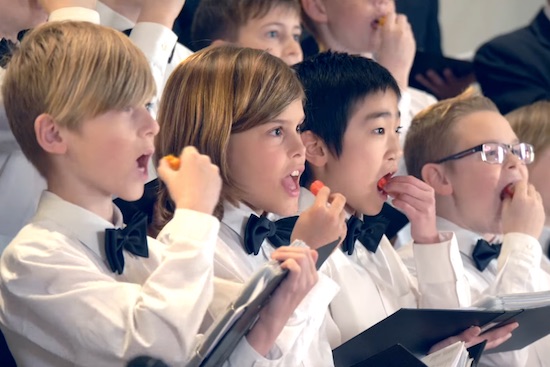 Eating a ghost pepper is probably never going to be on my list of recommended activities, but it definitely isn’t going to be if I actively have to do something immediately after eating it. This video proves exactly why that is.

In the video, some guy from Denmark called Chili Klaus (huh?) has headed back to his hometown to sing with the old choir that he used to be a part of, and decides to feed them all ghost peppers before they perform a rendition of ‘O Come All Ye Faithful’. Needless to say, the results are pretty damn hilarious as these kids try to act like professionals but obviously can’t keep it together given the extreme amount of heat pressure that they’re suddenly under.

You’ll probably feel their pain too:

Yeah that doesn’t look like it was fun at all but fair play to them all for sticking it out and going for it. Kinda looks like they were in more pain at the end when they actually stopped singing though rather than during the actual performance when they were gurning all over the place and sweating their balls off. Just saying.

More more ghost peppers, check out this cocky kid swallowing one and getting completely owned by it. Unlucky pal.