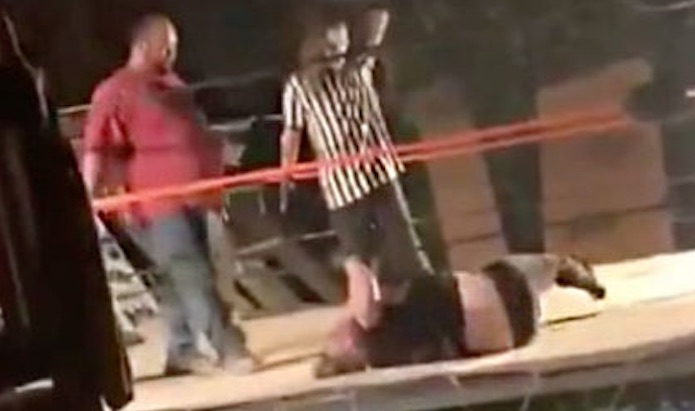 They’re not supposed to bend that way.

I wasn’t really aware that backyard wrestling events were still going on considering we’re in the midst of a global pandemic and I doubt that kind of an event is conducive to stopping it spreading, but where there’s a will there’s a way judging by this latest video – it definitely hasn’t ended up too well for one of the participants though.

Not really sure where this is from or who is involved, but it seems as though it happened fairly recently. The footage itself is completely unbelievable though as the wrestler isn’t even fighting the other guy and just jumps off the turnbuckle as he was making his entrance and playing to the crowd and somehow ends up landing funny and breaking both of his legs.

This is a real gruesome moment, so be warned before you click play here:

Jesus. How has this guy managed that? Should he even be competing in backyard wrestling matches if his legs are so brittle that they end up snapping at the slightest impact?

I guess the answer to that question doesn’t matter now though, as the guy probably has a lifetime of pain ahead of him, thousands of dollars of medical bills to pay and a bunch of surgeries as well. Hope he gets fixed up and that this one moment doesn’t ruin his entire life. Maybe if the video gets shared loads he might be able to pay for his medical bills? Fingers crossed for the guy. Should probably say something like don’t join a backyard wrestling federation unless you know what you’re doing at this point too.

For more of the same, check out a similar incident when a gymnast broke both her legs in a horrific fall. At least she was competing at the Olympics or something though.