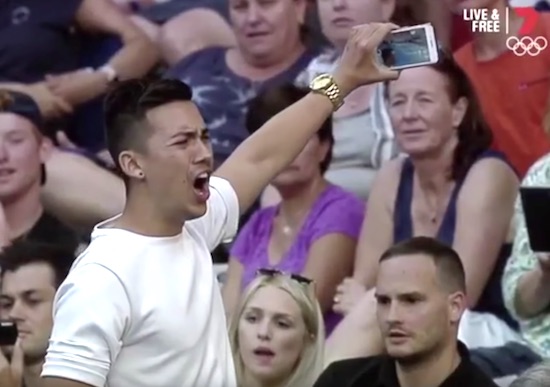 Not sure if this guy has ever actually had sex.

Everybody knows that when you’re watching a tennis match you’ve gotta be quiet during the rallies so that the players can concentrate, but in literally every game there’s some asshole who has forgotten to turn off his phone and screws everything up for everyone.

Then there’s assholes like ‘prankster’ Jamie Zhu. Jamie thought that it would be a hilarious idea to head to the Australian Open and record himself making loud sex noises just as Nick Kyrgios was about to serve. You can check out just how funny this was in the video below:

Yeah, that wasn’t really funny at all was it, despite Zhu saying that it was ‘the greatest thing he had ever done’. Guess he hasn’t actually done that many things in that case.

Probably also need to spend a brief moment talking about Zhu’s rendition of ‘sex noises’. Kinda inclined to think that he’s never actually had sex either if that is his impression of what doing the dirty sounds like. Guy just seems like a really annoying born loser to be honest.

For more of the same, check out this story about a mom who really hated it when she found out where the sex noises from the flat upstairs were actually coming from. Plot twist.