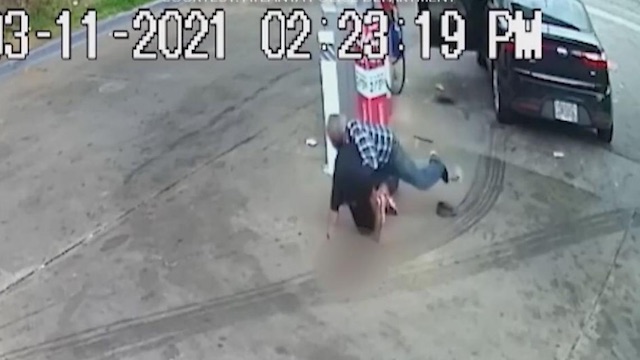 If you’re a teenage carjacker then a really old looking man probably looks like a potentially easy target – especially if you’re a majorly heartless bastard – but guess what? Not all old men are as weak and frail as they look.

This video comes from over in Atlanta, where the old dude was just minding his own business pumping gas into his Kia at a Chevron gas station when the kid game over to him and pulled a gun, telling the man to let him have the car. The old man wasn’t having it though and went after the kid, wrestling him to the ground and fighting him for a bit.

Sadly, the old guy did end up running off after the teenager pointed the gun at him again and asked him if he wanted to die today, but even though the youth managed to procure the keys he somehow couldn’t manage to start the car and instead ran off into the wild himself as well. What a pathetic failure:

OK, that’s not as impressive as I thought it was going to be but still pretty damn awesome from the old guy to not let this little prick get away with it. Turns out it worked out for him too because he found the keys to his vehicle discarded on the sidewalk after the little shithead got scared and pegged it after he couldn’t start the car. What a loser.

The Atlanta Police Department have yet to identify him, so if you’ve got any leads get in contact. I doubt they’ll be holding their breath though.

For more of the same, check out this sickhead 70 year old bodybuilder who is completely ripped. Badass.