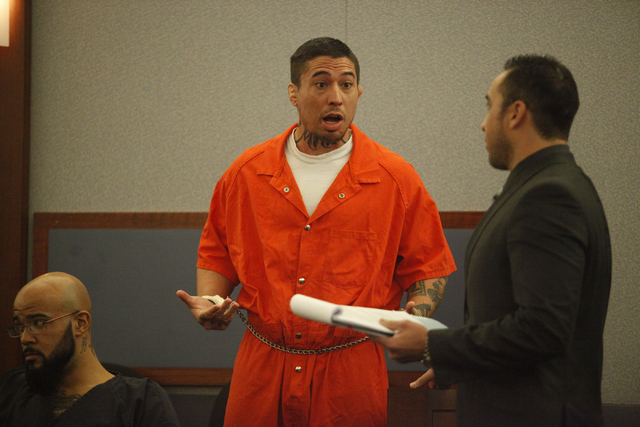 War Machine – real name Jon Koppenhaver – has been handed a 36 year jail sentence by Judge Cadish, at which point he will be eligible for parole. He’ll be 71 by then and Christy Mack will probably be hoping that he doesn’t make it to that point as she’s pretty certain that he’ll kill her if he ever makes it out.

At least that’s what she said in her heartbreaking witness impact statement – which is probably partially responsible for the length of War Machine’s sentence. You can read it in full below and see her deliver it somewhere in the video too around 8 minutes. This is pretty devastating stuff though, you’ve been warned:

I just wrote this last night. I’ve been putting it off, obviously. It’s been a really long three years, and I’m so ready for this to be over, and this is the last thing I’m going to say about this case and about how this has affected me personally.

Last night, I looked back through my journals at the things I had written when I had just needed to get the words out. I kept them so I didn’t actually have to speak the words that I knew were wrong. In reviewing them, I thought it would help me refresh my memory of what it felt like three years ago when everything was so fresh. But as I looked through them, I realized I didn’t need a crash course in my consciousness from years ago. I still carry all those same feelings and memories that I have today.

I love Jon, and I know in some way he loved me, too. We were far from a conventional couple in an ordinary relationship. We didn’t have normal jobs. We didn’t keep normal hours. We had the opportunity to spend copious amounts of time together, and we shared every aspect of our lives with the entire world. When we met, I wasn’t looking for a relationship or any sort of companionship at all. I was sick the day we worked together; he seemed genuinely concerned for my well-being and continued to check on me for days after. When I felt better, he made plans to see me in (Las) Vegas, and after that the first three months that we were together were beautiful. He was so interesting to me. He was full of energy and so passionate about everything. I was drawn to his tenacity, and Jon was different from anyone I had ever known.

After the first few months, things began to change. It started with just a slap and rapidly became exponentially worse. I’ve had my head split open from somersaulting into a fireplace. I’ve experienced being lifted from my throat countless times, choked unconscious, or dragged around by my head. I’ve been punched and kicked, smothered and bitten. I have been raped and tortured. (I remember) taking a breath for a scream, only to be met with a hand over my nose or mouth, not knowing if I will ever be able to breathe again. It’s the most terrifying experience of my life, and I was met with this more times than I can count, and I still cry every time I think about how it feels. I flinch when anyone puts their hand near my face. I hold my breath when I hear an unfamiliar noise. I become nearly unconsolable when I hear parents chastise their children, because they’re just saying words that I would hear from my abuser – constantly berating me, asking me what I was sorry for, asking me why I was crying, asking why I had to do these actions. He hit me or smothered me until I stopped crying or passed out.

Now I feel uncomfortable around men or people in general. I don’t leave my house unaccompanied if at all possible. I have shortened my list to about five trusted people, so that means not leaving the house for days or weeks at a time. I began going to the gym recently and got a trainer as a way of trying to get out of my house, because I know that’s not a way to live.

I would say these things because I feel I should be generally safe in my house, but that’s not true. I’ve had the police come out more than once for not knowing if the noise I heard was something benign or somebody trying to kill me. I can’t function in a normal way daily any more. I don’t see my friends, and I don’t have relationships. My family has noticed a difference in me and have experienced their own changes. My mother moved to Las Vegas with me when I came from Indiana. She lived with me and watched my relationship with Jon from beginning to end. When I went to the hospital, she truly felt responsible and blamed herself for not reporting the abuse that she had witnessed. As I lay in a hospital bed, she came and I told her not to cry. I hadn’t seen myself, but I knew that I was bloody. From that day, we’ve both lost about 30 pounds each. We both become instantly afraid of our surroundings, and we never truly felt safe again.

Over the years, I’ve tried to regain my independence. I live alone now, with an advanced security system, and I get to travel sometimes, though never alone. If I go for more than 12 hours without speaking to my mother, she fears the worst. She has to make sure I haven’t been forcibly taken and beaten again. I would say it’s an irrational fear, but after years of being told he would send people after me, or if I ever told someone, I don’t feel like it’s such a stretch.

Since the day I was able to see the screen on my tablet, I was met with messages and emails detailing what he should have done to me. I was told he should have finished the job and killed me. I was told I was nothing but a whore, and I got what I deserved. It was even implied by the defense team that it wasn’t that bad, and I was just doing it for attention. The tweets came in droves of how he should beat and rape me since he hadn’t completed his task. I live in constant fear of these things coming to fruition, and others acting on this belief that he’s done nothing wrong.

The only positive that I can mention that’s come from this experience are all of the people that I’ve been able to help. I did not expect so many letters and messages and emails telling me their stories and sharing the most intimate parts of their lives with me. After I left the hospital, I spent hours every day reading these messages and taking on all the deep emotion that they had put into their words to me. It will be with me for a long time, remembering all the terrible things these people have experienced and all the cruelty and hatred in the world.

I reached the realization that I could have, and I would have died. I don’t know why I got up. As I lay on the floor, beaten and bloodied, I felt nothing. I was totally numb. I could have laid down and died and felt nothing when he’d gotten that knife. But I took those letters as a sign that I could truly help others with my experiences. Years later now, people tell me how much seeing my story unfold and seeing me stand up to my abuser has helped them. I can’t tell you how many women, men and even children have reached out asking for resources and advice. Some of them just want to be heard and share their hardships with someone who understands. This is something that motivates me every day and makes me continue to share my life, even when it becomes nearly unbearable.

It’s hard to tell people how much it hurts to hear the cruel things that people say to me every day, and how hard it is dealing with triggers, or even being alone in my own home. I don’t get to share my true thoughts or feelings a lot, or talk about the ways this has affected me personally. I feel that I have to stay strong for every woman that draws inspiration to leave their abusive situation and find ways to move on. Every day is a chance to try to improve myself, work toward my mental health, and improve my relationships with everyone around me. I am still a work in progress. I don’t know how long he deserves to be in prison. I don’t know how much time would make me feel good or would make me feel right. When we were in talks before the trial even began, with the plea deals, Ms. Bluth had asked me if 16 years felt sufficient. I thought about it, and I said I could build a really good life in 16 years. How do you really put a time on a life lived. I don’t know if my life will feel complete in 12 or 20 or even 30 years, and neither do you. But I do know that when he gets out, he will kill me.

The outcome today isn’t my decision, but I have trusted the court through this whole process, and I hope that the justice system won’t let me down after all these years of being a victim. I would really like to be able to say to everyone that they can trust in the justice system, and they should press charges against their abuser. There are so many people, women and men alike, that don’t go the justice route and just let things take their course. And I want them to know there is justice out there. Thank you.”

Jesus. I don’t really know what to say about that. Props to her for standing up, sharing that and coming out the other side while helping so many people since then as well. I guess that’s all you can say really. Man – you’ve really got to feel for her how this fucking prick has destroyed her life.

36 years might sound a bit light for War Machine after all that, but things could have been a lot worse for the guy. He was also accused of attempted murder during his court case, but two juries were hung over the issue. That would have carried a much harsher penalty. Still think he’s probably getting less than he deserves though after hearing Christy talk.

There’s a chance that War Machine can appeal in the future, but I doubt he’ll be able to do anything about it, so it looks like he’ll be facing the inside of a cell for the next 36 years. Ouch. If you want to watch a news report on it which shows him looking suitably shocked during his sentencing, then you can do below:

Yeah, would not like to be that dude right now, but considering the hell he put Christy Mack through and his notorious violent streak, I think it’s probably for the best he’s locked up now. He’s a fucking animal for what he’s done to that woman and he deserves 36 years in prison.

However, it does kind of seem like War Machine has actually realised the true error of his ways, judging by this grovelling apology he issued after he was found guilty. Too little too late though pal – I guess he’ll have a long, long time to think about it.