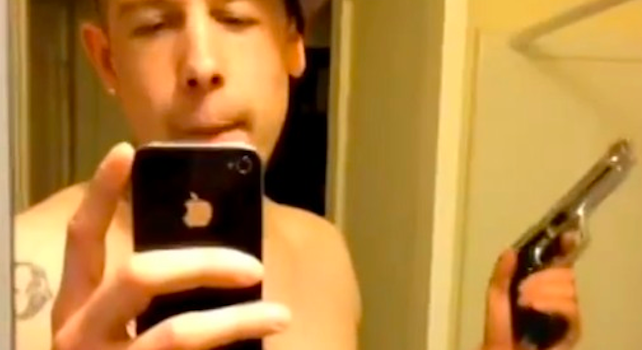 There was really only one way this was going to end wasn’t there?

If you’re a white guy who’s into gangster rap in the US then it’s probably a given that at some point in your life you’ve posed in the mirror waving a gun around reciting your favourite Eminem lyrics and thinking you’re the world’s biggest badass. It’s also probably a given that upon doing so you’ve probably set said gun off, pissing everyone off in your neighbourhood and almost shooting yourself too – I’ve seen 8 Mile, I know that stuff happens all the time.

And that’s exactly what happens to this dork in this video, the only difference being that he’s English (ugh) and was filming when he did it and thought it might be funny if he uploaded it to  the internet. Well, he was right about that because now the whole internet is laughing at him.

His rapping/singing is fairly terrible too. All round fail for him basically.