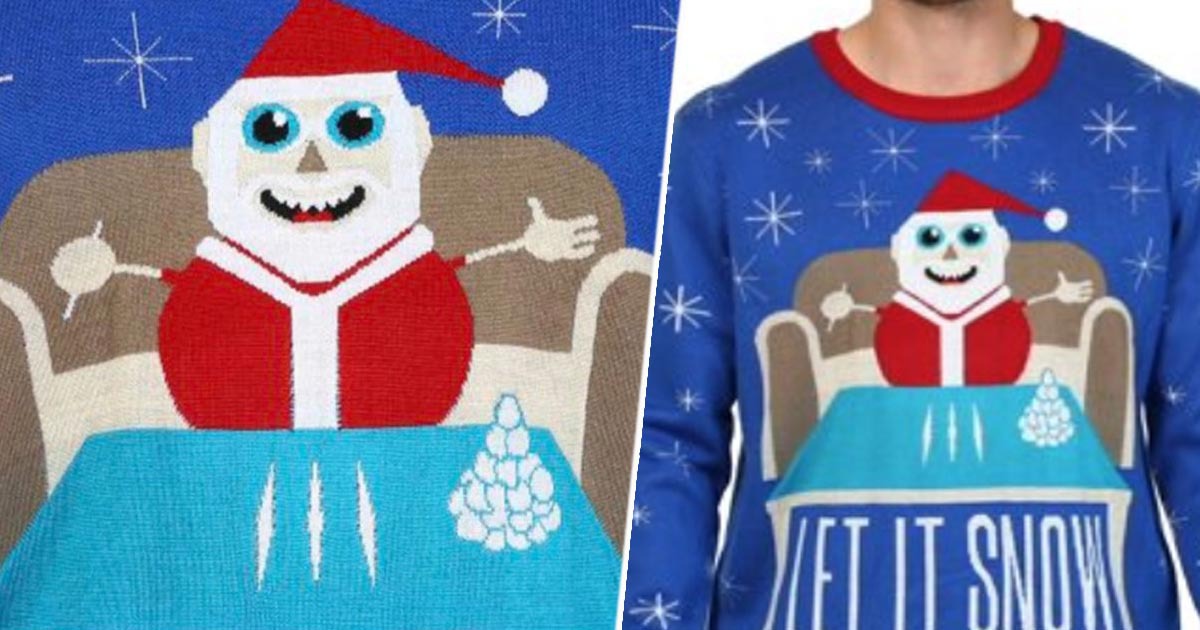 Can’t believe they sold this.

One way that people like to celebrate Christmas is by wearing ridiculous Christmas jumpers, but I think that Walmart have really crossed over the line into serious bad taste with these ones that they’re releasing depicting Santa doing a whole load of blow.

The jumpers were available courtesy of Walmart Canada until they were recently pulled for being too controversial and feature none other than Father Christmas himself sitting down at a table to hoover up some lines of coke with the catchphrase ‘Let It Snow’. Really is base isn’t it?

Here’s what the product description said:

We all know how snow works. It’s white, powdery and the best snow comes straight from South America. That’s bad news for jolly old St. Nick, who lives far away in the North Pole. That’s why Santa really likes to savor the moment when he gets his hands on some quality, grade A, Colombian snow.

He packs it in perfect lines on his coffee table and then takes a big whiff to smell the high quality aroma of the snow. It’s exactly what he needs to get inspired for Christmas Eve.

Lol what are they thinking there hey? To be fair, these are the kind of jumpers that will appeal to a certain demographic – think your energy drink swigging divorced 28 year old cousin from out in the sticks – but even so I’m surprised that a major worldwide brand like Walmart would want to be associated with them, despite the possible financial benefits.

Predictably, they were quick to issue an apology after loads of people comaplianed about how crass and low brow the jumper looked:

These sweaters, sold by a third-party seller on Walmart.ca, do not represent Walmart’s values and have no place on our website. We have removed these products from our marketplace. We apologize for any unintended offence this may have caused.

Pussies. Sure you can probably still find these jumpers somewhere online if you still want to pick one up. Sure they would make a good present for at least one person you know.

For more of the same, check out 25 of the worst Christmas jumpers ever. Awful.