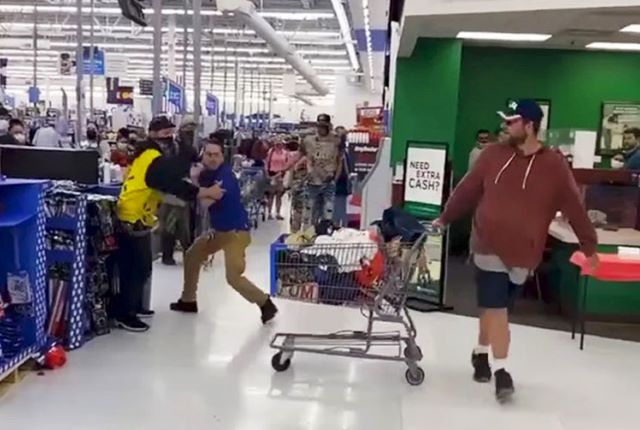 It’s so good to see things getting back to normal.

Word to the wise – if you smash your shopping trolley into an overworked and underpaid Walmart employee and then spit in his face as he’s being held back, you may just end up on the receiving end of a knockout blow to the back of the head.

As this guy found out…

Now there is plenty of debate on the internet over whether that was really a KO blow at all. Could it be the customer took a Ric Flair-style dive in order to sue the crap out of Walmart? Which is after all, the American way?

If you look close enough I think you can actually see the dollar signs register in the customer’s eyes as he gets hit and then takes a moment before dropping ‘unconscious’ to the ground. No matter how the situation started, Walmart will probably pay him $20k or something to just go away. If they don’t he’ll probably still win the lawsuit because at the end of the day a Walmart employee attacked a customer as he was walking away, not in the act of defending himself. No matter what happens – dude’s getting paid. America!

I see a couple people complaining about the ‘sucker punch’ as well but I don’t have an issue with it in this case. Once you spit on a person, all rules go out the window. Hopefully this lad doesn’t lose his job over it.

For the woman who called out Walmart for pushing a global elite agenda because they were sharing pro wrestling-themed NWO shirts, click HERE. Classic.