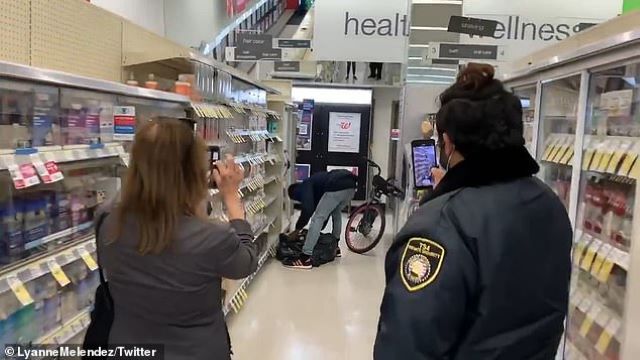 A tragic yet (somewhat) amusing scene out of San Francisco this week, as a thief just casually rode his bike into a Walgreens branch, stuffed his bin bag full of items, and then just casually rode back out without anyone challenging him whatsoever.

This just happened at the @Walgreens on Gough & Fell Streets in San Francisco. #NoConsequences @chesaboudin pic.twitter.com/uSbnTQQk4J

The best part is how the lady filming on the left asks the security guard “should we call 911?”, and the guard just gives the most indifferent body language ever without even looking at her. The thief, who was so comfortable he even had the time to open the kick-stand on his bike, just does his thing without a care in the world… 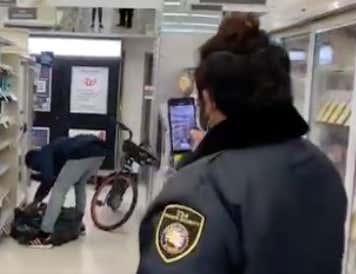 The security guard, while still holding his phone in one hand, then makes a pathetic attempt at grabbing the bin bag filled with stolen items as the thief rides by but of course completely fails and the crook rides right out of the automatic door to freedom.

So yeah, a completely pathetic scene all round, although on one hand I do sympathise with the security guard who has maybe seen enough shit in his time to know that it’s just not worth the risk of being stabbed/shot over. Maybe he’s just employed to stand there as a deterrent and filming a crime rather than stopping it is part of his job description at this point.

Although to be fair, the last time we shared a video of a Walgreens security guard actually putting some effort into stopping a robbery, it wasn’t very successful either…

Maybe time for both men to find a new career.

To watch a Tesco security guard dish out a harsh dose of justice to a shoplifter, click HERE. That’s how you do it!