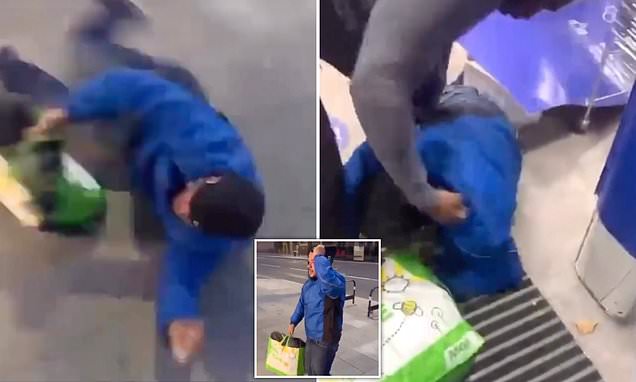 I’m not sure what the protocol is when dealing with shoplifters in Tesco supermarkets around the UK, but I’m pretty sure it doesn’t involve beating the shit out of them inside the store before throwing them out on their butts.

Nonetheless this was the tactic deployed by a security guard at Tesco Express on Blackfriars Road in Elephant & Castle, London, the other night. The guy filming was loving every second:

Tough look for that shoplifter being lobbed out of the store like he was just eliminated from the Royal Rumble or something. No idea what went on before the footage began but you have to think he got physical with the security guard for things to end up the way they did. In which case I guess the violence was at least somewhat warranted.

The best bit is how the thief gets back up after being thrown out of the store, asks for his T-shirt back, and then asks the guard “what time do you finish bro?” as though he’s gonna come back and finish the fight when the guy is off his shift. What was stopping him from finishing it there and then? Probably the fact he got his arse totally handed to him on camera. Unlucky.

To watch some lunatic in Liverpool try to pick a fight with a whole bunch of people outside Tesco’s, click HERE.