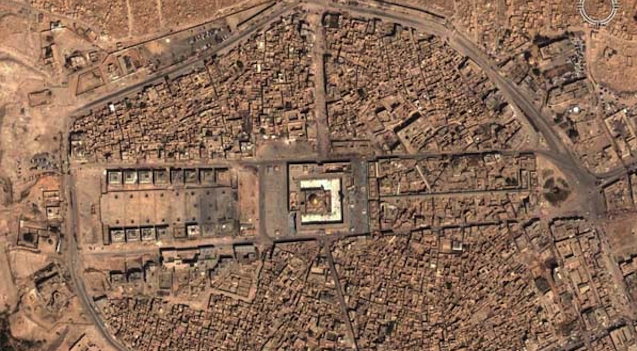 It’s officially the biggest graveyard in the world, with millions and millions of bodies buried in it.

If you were ever on Google Maps trawling through the desert looking to see what you might find, you would probably assume that this huge settlement was a massive city in the middle of the desert, but you’d be wrong. Dead wrong.

It is in fact a massive graveyard known as Wadi Al-Salaam, which roughly translates as ‘Valley Of Peace’ and it covers more than 1485 acres, which is the size of a small city in the United States. It’s full of millions of graves and dead bodies which officially make it the biggest graveyard in the world. It’s so huge that visitors often use bicycles to travel around it as walking would take way too long.

The reason that so many people are buried here is that there is a Shiite belief that souls of all faithful men and women will journey there, no matter where their bodies actually are. Even so, many Shiites wish to be buried there and this is a tradition that has existed for over 1400 years. It’s estimated that every year a further 500,000 bodies are added to the graveyard. Many Muslims visit the graveyard to pay tribute to deceased loved ones, and religious leaders often pray and worship in it with their congregations.

There’s also a strong military presence in the graveyard, due to the violence that has often occurred there. This was most notable during the 2003 Iraq war, as Iraqi militia would often ambush enemy forces in the long winding streets as they had a local knowledge of the area that Allied forces did not possess. Since the war began in 2003, the graveyard has expanded massively.

You can find pictures of it below and on the next page: