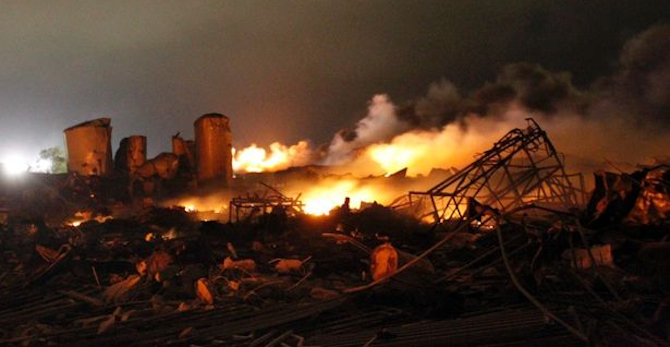 If you’re a Texas redneck and a fertilizer plant is on fire, what are you gonna do? Probably not help or anything but just film it like a badass. Until it explodes massively and you completely lose your shti and look like a pussy, that is.

This is pretty scary but also pretty epic as well. In case you didn’t hear, last night in Waco Texas there was a massive explosion when a fertilizer plant somehow caught fire and exploded. The blast killed 15 people, injured 160 and levelled homes and businesses in every direction for a four block radius and also rained down debris all over the terrified residents. Apparently the blast was so powerful that it shook the ground like an earthquake and could be heard up to 35 miles away. Wow. That’s a pretty big explosion.

The town is completely devastated and messed up over this, but to be fair it does sound pretty crazy. One guy said he was playing basketball at a nearby school and the blast was so massive that it actually knocked him off his feet. I can’t even imagine experiencing something like that or what it would feel like so I guess you could say that that in itself is completely mindblowing.

Fortunately I can get some idea though thanks to this dude who managed to film it and boy is it scary. The video starts off fairly boring and it’s just this dude filming the plant that’s on fire for ages. It’s kind of cool because he’s doing it from his car and seems to want to get himself in the rear view mirror but never manages to position it well enough to do it. He is driving a pickup though which is obviously supercool and very Texas. I bet he was wearing a cowboy hat. And it probably got blown off when the explosion hit.

But yeah the video kinda lulls you into a false sense of security and then when you least expect it BOOM. This is probably one of the biggest explosions I’ve ever heard and the aftermath in the car between the guy and some woman is pretty terrifying too. For once I was actually speechless. And I’m pretty glad I was nowhere near this explosion. And that’s not just because it was in Texas, it’s because it was a huge mindblowing explosion that completely blew the shit out of everything and this video illustrates this perfectly.

Russian Armour That Will Blow You Up