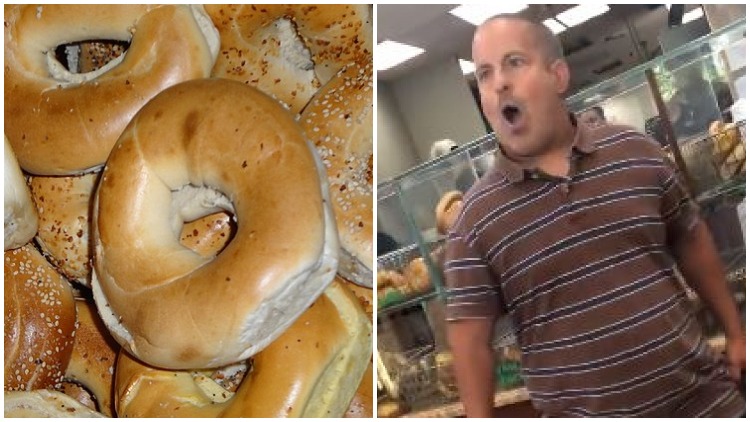 “I want equality for everybody.”

As mentioned when we discovered his YouTube channel earlier, the angry short man who went viral after his meltdown in a bagel shop this week is 45-year-old New Yorker Chris Morgan.

The divorced, childless cleaning company owner spoke to the Daily Mail today and claimed he’s glad his rant went viral. Here’s what he had to say…

He claims he asked for his order three times, but the girl behind the counter claimed she couldn’t understand him.

‘The third time, she smirked with her friends,’ he shared. ‘She was laughing and talking with her friends, putting her hand over her mouth and laughing, like girls do when they reject me on a date.’

And at the Bay Shore Boss Bagel, Morgan had finally reached his tipping point.

‘I got to the point where I’d had enough,’ he added.

On getting tackled at the end of the video by a guy much bigger than him (which he literally asked for, to be fair):

‘I was telling them I couldn’t breathe. The guy was holding me down. I had my shirt over my head and I was trying to call 911,’ Morgan explained while rambling.

‘It was the big boys all the women go for, they jumped me. The women didn’t say nothing. They keep on choosing the wrong men. Is that all women want? Tall and with a big you know what?’

Morgan, who got married in 2007 before getting divorced five years later, clarified that he was ‘tired of the immaturity.’ And while he was seen in footage being the aggressor, he asserts that he just wants ‘justice.’

On his resentment of women:

‘I’m just not tolerating this any more,’ Morgan declared. ‘Some of those girls found it funny. That’s why I have resentment towards women. I find them all to be stupid, gold digging liars.’

In the interview he also proclaimed that he was a ‘prophet’ and ‘the modern day Martin Luther King’. Say what?

I have a mission. The girls hate me, they don’t like me, that’s fine,’ he added. ‘I’m not stopping and the world is going to hear me. I want equality for everybody.

‘Whatever happened to the love of the 60s?’ he asked. ‘When people loved each other for themselves?’

Not sure how he’s going to achieve equality for everybody by going nuts in bagel shops and yelling about how much he hates women, but OK.

Obviously you have to feel for the guy because it cannot be easy going through life at 5 foot tall (or 4’11” as he claimed in a previous video) but that doesn’t really excuse his very public meltdowns and shitty attitude towards women. How can that possibly make your situation any better?

To watch Chris completely lose his shit at a 7/11 worker who asks how tall he is, click HERE.