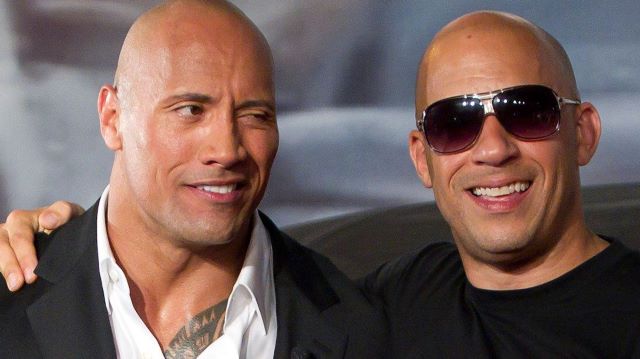 The two megastars famously fell out years ago.

“My little brother Dwayne... the time has come. The world awaits the finale of Fast 10. As you know, my children refer to you as Uncle Dwayne in my house. There is not a holiday that goes by that they and you don’t send well wishes… but the time has come. Legacy awaits. I told you years ago that I was going to fulfill my promise to Pablo. I swore that we would reach and manifest the best Fast in the finale that is 10! I say this out of love… but you must show up, do not leave the franchise idle you have a very important role to play. Hobbs can’t be played by no other. I hope that you rise to the occasion and fulfill your destiny.”

Absolutely outrageous move by Vin Diesel to refer to Dwayne ‘The Rock’ Johnson as his little brother when The Rock is taller, heavier, stronger and an infinitely bigger movie star than him. He even purposely posted a picture that somehow makes him look bigger than The Rock. If you’re going to publicly plead with the man to re-join the Fast & Furious franchise, maybe try doing it without passive aggressively undermining him? Not to mention the underhanded tactic of invoking Paul Walker and mentioning his daughter. Does Vin Diesel think The Rock, who he famously fell out with years ago, is that easy to manipulate?

Either way, why would The Rock want to return to the franchise at this stage of his career? He’s already the biggest and highest-paid actor in the world (or up there anyway). His Hobbs & Shaw spinoff was a massive success in its own right and he’s been busy making blockbuster crap like Jungle Cruise while also involved in more legit projects like Black Adam. All while making serious bank outside of the movie game, like with his Zoa Energy drink (which is apparently terrible, but that’s neither here nor there).

Obviously it would be pretty cool if The Rock got on board for the finale for one last big battle alongside the biggest stars of the franchise. He could literally name his price at this point. It’s just a bit irksome the way Vin Diesel has gone about trying to convince him. Although I guess it must pain him to ask The Rock for anything given what Dwayne Johnsons said about him recently.