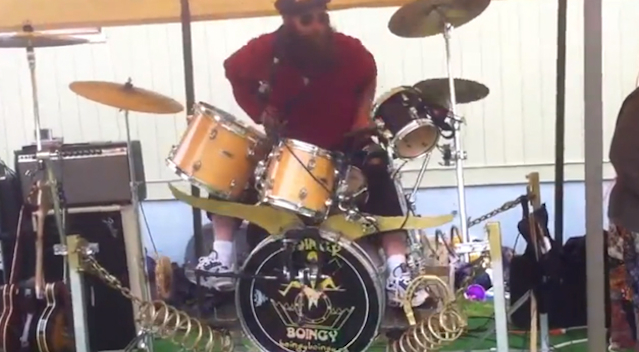 I’m not talking about some death metal drummer who has about a thousand cymbals and four kick drums in this post either – this is seriously out of control.

If you’re playing in a T-Rex covers band who solely seem to play in front of portakabins at what looks like a school picnic, then you’re probably gonna think that you might need some kind of gimmick to keep the crowd interested through your set whilst you murder a bunch of classics.

Thankfully, this guy has found it by jazzing is drum kit up no end. For the entirety of this clip – and I’m assuming their whole set, which could have lasted anywhere from twenty minutes to three hours – the drummer is playing his drumkit on top of some springs, so literally throughout the whole song the drumkit and the drummer is just bouncing up and down on the spot and moving around the stage.

It still doesn’t distract you from how shit the band is though.

â˜› More Drums: Man Banned From Driving For Being Under The Influence Of Drum N Bass