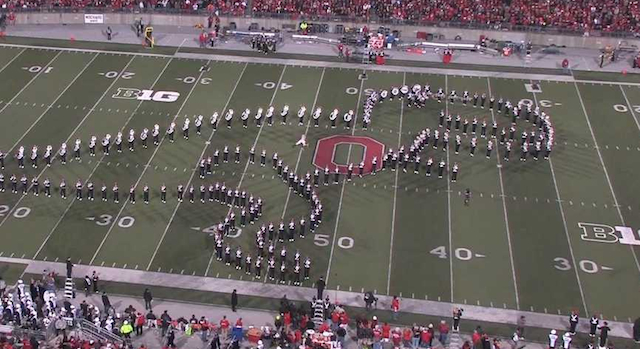 The Ohio State Marching Band raise their game yet again with their latest performance.

The Ohio state marching band has been mentioned on Sick Chirpse before for their innovative approach to playing halftime shows (we featured them before playing LMFAO’s Party Rock Anthe) but they’ve really taken it to the next level with their most recent performance during a match between OSU and Penn State.

There were a bunch of awesome movie related formations but they really finished with aplomb when they made a giant formation of a dinosaur and had it eat the mascot of their arch rivals Michigan State, who they are due to play in a couple of weeks time. This was followed by two battleships representing both of the teams, with the OSU battleship sinking the Michigan State one, followed by the skull and crossbones.   The transitions between the different formations and the choreography was – as ever – completely seamless. Seriously impressive stuff.