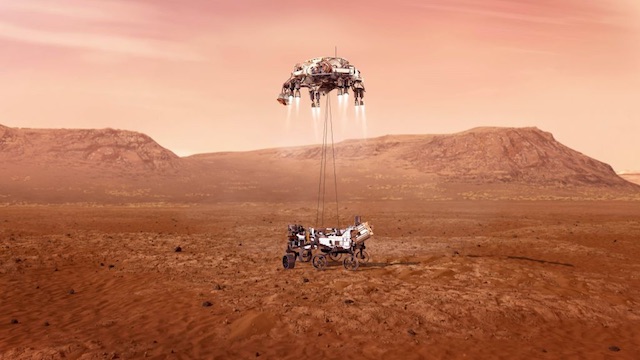 There future is now.

There was some pretty cool news last week as the first ever Rover landed on Mars and sent back some audio and pictures from the planet for the first time and now the whole situation has become even more spectacular after NASA released new footage from the landing that’s almost guaranteed to blow your mind.

The multiple high definition camera system covers the entire descent of the Perseverance onto the surface of Mars, including the tense final moments. It begins with the supersonic deployment of the biggest parachute ever sent to another planet and ends with the back wheels of the rover successfully touching down on the surface of the red planet.

Take a look at it below and enjoy it – it’s truly wild:

This is what it looks like to land on Mars from the Perseverance’s perspective 🤯#CountdownToMars #Mars2021 pic.twitter.com/p9jBnWcXaN

Now that you’ve seen Mars, hear it. Grab some headphones and listen to the first sounds captured by one of my microphones. 🎧https://t.co/JswvAWC2IP#CountdownToMars

Crazy, although the sounds are just kinda like the wind or something? Not as exciting as I hoped but the landing video is rad.

The rover’s missions is set to last for one Martian year – or 687 Earth days – and will see it collect samples from the planet’s surface as well as information on the planet’s geology and climate, hopefully one day paving the way for a human mission up there. Crucially, one experiment that they will carry out is whether or not it’s possible to manufacture oxygen in the Martian atmosphere. Gonna be an interesting couple of years as we finally learn more about the red planet.

For more of the same, check out when the last Mars Rover went AWOL and sent back this disturbing message. Is something going on up there?