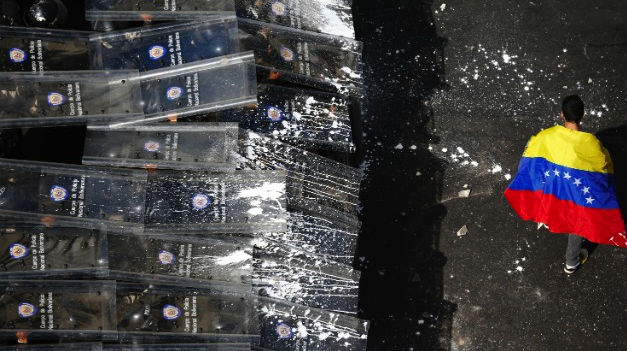 Protests boiled over in Venezuela two nights ago as the government employed mercenaries from Cuba to ride around on motorbikes shooting everyone.

Most eyes right now are on the Ukraine and all the fighting and protesting and violence going on over there, but halfway across the world things suddenly got just as bad in Venezuela. The incumbent government has pretty much turned the place into a Terror State amid protests against the President Nicolas Maduro – who allegedly did not win the election that placed him in power last year fairly.

The video below does a good job of explaining what has been going on there in the past few weeks before it got cranked up another notch last night:

Things went from bad to worse last night though as the protest went full on crazy. A blog called the Caracas Chronicles which is based in Chile and has been covering the Venezuelan political situation since 2002 posted a blog article yesterday that has been widely circulated detailing the uprising and the current conditions that are prevalent in the country.

It alleged that state sponsored paramilitary units and mercenaries from Cuba were now roaming the streets on motorcycles in ‘middle class areas’ and storming apartments and shooting anyone who looked as though they were protesting, whether it was violent or non-violent. As stated in the video there has also been a media blackout with only state sponsored television channels being allowed to broadcast within the country, and the internet has also been completely shut down in one city of 645,000 inhabitants.

There are videos below of riot police shooting people in the street and firing tear gas canisters into a residential  apartment block. These videos also seem to be legit too although it is hard to be 100% sure of anything in this conflict due to the media blackout. Don’t watch these if you’re squeamish.

More background information about the situation in Venezuela and pictures from the riots over the page: