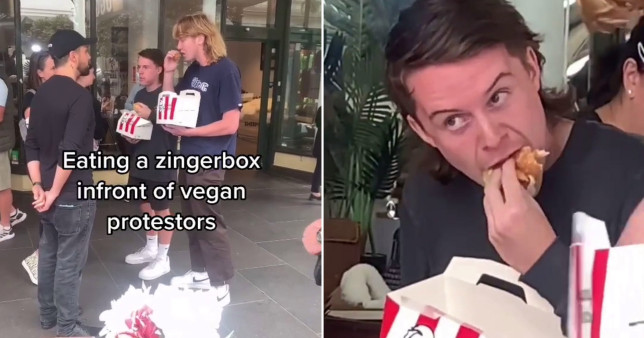 In my experience, life is never easy for vegans as they’re constantly taunted and mocked by carnivores and other members of society for their beliefs and I imagine that it must be even tougher and more annoying for militant vegans that actually want to protest against meat eaters and this has once again been proved correct by the latest trend on TikTok.

Seems like some people on the platform have nothing better to do then find out where the vegans are protesting and film themselves going up to them and eating KFC right in front of their faces. Nick and Bill have more than 85,000 followers and decided to eat a Zingerbox meal in front of some of the protesters in Melbourne.

Take a look at the ‘groundbreaking’ video below:

That’s kinda funny I suppose, but I think I’ve also gotta give it to the vegans for reacting calmly and not blowing up when these idiots have come down to deliberately antagonise. I might not particularly be enanmoured with veganism or anything, but I think it’s kind of an asshole move to go out there to deliberately piss these guys off, especially given how sensitive we all know these guys can be. Give it a rest.

For more of the same, check out these vegan protesters yelling at meat eating diners in Perth. Goes both ways I guess over in Australia.