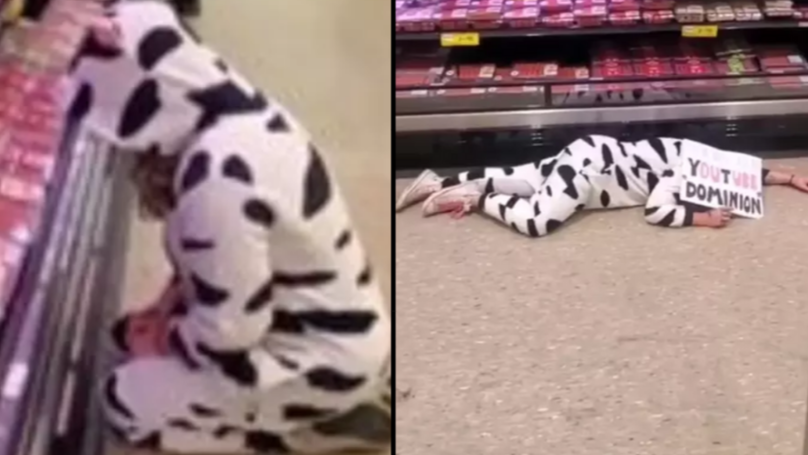 This is just getting silly.

The vegan movement continues to gather pace, but I’m not really sure if that’s due to the increasing number of vegan protesters doing increasingly wacky and crazy stunts to raise awareness about the issues surrounding the meat and dairy industry. Most of the time they just piss people off and annoy them.

The latest episode in this never ending series involves an Australian protester dressing up as a cow and slowly walking through a Perth grocery store until she reaches the meat section, where she drops to her knees and grabs a packet of sausages and starts moaning and crying. She then recommends everyone watch the YouTube documentary Dominion which goes into major detail about the horrifying conditions animals are kept and murdered in so that you can eat bacon sandwiches every day.

I mean people are out there describing this as powerful and heart wrenching but to be honest I just think it looks kinda lame and annoying myself. I guess maybe it will get people to watch Dominion which could cause them to change their lifestyle, but it’s probably gonna come across as gimmicky and lame to way more people and probably reinforce their beliefs in never ever switching over to the vegan way of life.

I suppose these guys feel like they’ve gotta do whatever they can to force people into the change though and you can’t really fault them for their beliefs. Just laugh at them and think about how silly they’re being I guess.