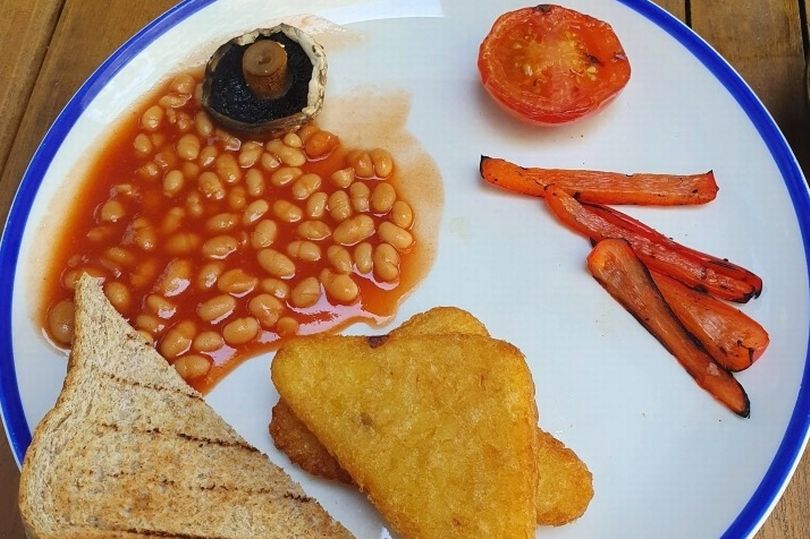 These days you kinda expect specifically prepared vegan food to be slightly more expensive than your regular meat dishes, but this ‘vegan breakfast’ from Center Parcs is taking the piss both in terms of quality and value.

37 year old Jennifer Carr from Scotland was on holiday at the Center Parcs Sherwood Forest in Newark when she was served up the £9.99 vegan breakfast that consisted of some bread, hash browns, a tomato, a mushroom, beans and a couple of strips of peppers. It basically looked like they just took all the ingredients from a regular breakfast but removed all the meat and replaced it with a couple of strips of peppers and then added a couple of quid onto it for all the hassle. What a joke.

Here’s what Carr said to The Sun about it:

I was really quite shocked. It was pretty small, so we had to order extra mushrooms, beans and tomatoes on top. I looked at it and thought, I’ve paid ten pounds for this. And we were starving afterwards.

It wouldn’t be hard to improve it given the range of items you can buy in the supermarket these days.

We love the Richmond vegan sausages, so they could have added those or even just some extra mushroom and extra tomato would have been nice – even a bit more pepper.

The trip was lovely. Center Parcs was great, the staff were lovely and everything was clean – we felt very comfortable. It was just the food that was an issue.

I know people will complain about vegans being fussy and making their own beds so they should lie in them, but Centre Parcs are really behind the curve offering up a shitty meal like this as their vegan option. The vegan market is booming out there and a real way to make a whole load of money, so just shortsighted of them to allow stuff like this to happen.

Hopefully this is the wake up call that they needed. They have apologised and said they’re reviewing their vegan options, so maybe it is?

For more vegan food, check out one of the worst vegan salads ever prepared. So poor.