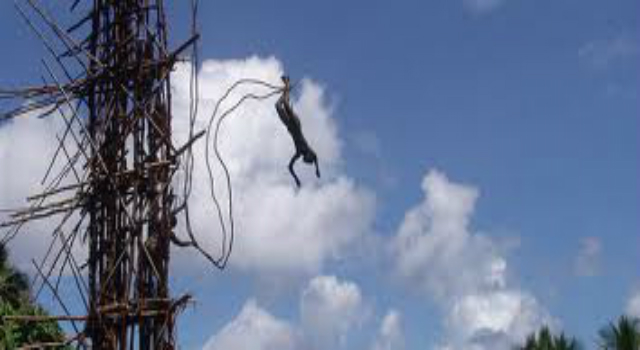 On the Pentecost Island in the Pacific, manhood is defined by jumping off of flimsy towers to impress both women and the gods. Welcome to the Vanuatu tribe.

8 years old? Time to prove your manhood! The Vanuatu tribe in the South Pacific has a ritual called N’gol that consists of stripping naked and jumping off of a tower with vines wrapped around your ankles.

Land Diving derives from the tale of a man who loved to bang his wife, so much so that she ran away into the forest in an effort to get away from him. Long story short he ended up following her up and down a tree, but forgot to tie vines around his ankles as she did and died as he fell and hit the ground. Basically, the ritual is performed to make sure guys don’t get tricked by their wives who don’t want to put out.

You’d think after hundreds of years of doing this they would manage to figure out certain logistics of building the tower, selecting vines appropriate for a person’s height and weight, or maybe even some basic safety equipment; the tribe still operates the ritual by just letting a person plummet 100 feet (30 meters) down a flimsy stick tower. Before tribe members jump, the ground beneath them is tilled and an elder chooses a vine for the jumper without any mechanical calculations. To dumb it down, the ground is turned into soil, and a diver is “eye-balled” as a vine is chosen for them. A boy then climbs to the top, takes a leap of faith and hopes not only his legs aren’t ripped out of their respective sockets, or the vines don’t break and he dies, but also that the top of his head hits the ground (the Gods aren’t impressed unless one’s head hits the soil). 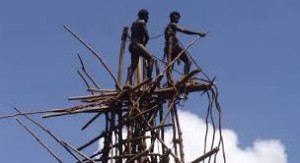 The ritual is only to be performed in the dry season as vines will show a tiny bit of slack. Because of this, there is miraculously only one recorded fatality in the history of the dives. This took place during a dive in the wet season; a diver jumped from the tower, the vines gave no slack and snapped. He hit the ground going over a hundred miles an hour and was rushed to hospital where he subsequently died due to his spine being completely obliterated.

Take a look at this video and then ask yourself “Am I ready to become a man?”