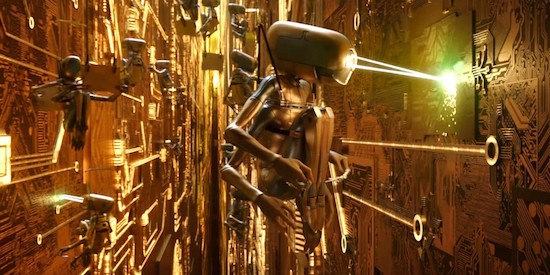 Luc Besson is back.

I remember watching the Fifth Element when it first came out a long, long time ago and being absolutely blown away by the visuals and the world that director Luc Besson had managed to create, even if the movie itself wasn’t the greatest. As far as futuristic set design went down, wow.

The movie was still decent enough though and worth seeing just for that fantastic universe, which is why I’m stoked about Besson’s new movie Valerian And The City Of A Thousand Planets, the trailer for which you can see below. Although it’s based on a French graphic novel, it pretty much looks like the spiritual sequel to The Fifth Element in that Besson has once again created an absolutely incredible looking universe that is going to literally smash your face off:

OK so I haven’t really got and clue what’s going on in that movie other than there are a bunch of insane special effects and aliens, Cara Delevingne and some guy are having a flirty relationship whilst they battle terrifying aliens and Rihanna shows up at one point, but I know that it looks like it’s going to be an absolute trip and a half. Luc Besson doesn’t usually let you down so I’m looking forward to this one. July next year baby.

For more Cara Delevingne, check out this story about when she complained to a flight attendant that someone wouldn’t stop watching her having sex on a plane. No shit.