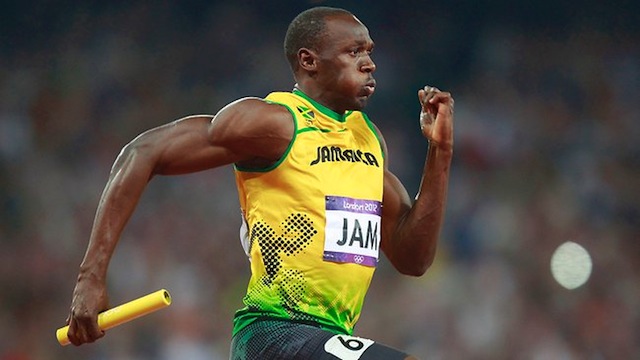 Usain Bolt claims he was eating 100 chicken McNuggets day and having tons of random sex when he won 3 gold medals at the Beijing Olympics. Could they have been the key to his success?

Usain Bolt has a new memoir out next week — ‘Faster Than Lightning’. An early anecdote has leaked in which Bolt writes that during the Beijing Olympics, he would munch freely on McDonald’s chicken McNuggets and have sex with any woman he wanted.

On the Maccy D’s: “At first I ate a box of 20 for lunch, then another for dinner. The next day I had two boxes for breakfast, one for lunch and then a couple in the evening. I even grabbed some fries and an apple pie to go with it.”

He estimates that during his 10 days in Beijing, he ate 100 nuggets every 24 hours. That’s 1,000 chicken nuggets. “Man I should have gotten a gold medal for all that chowing down”, he adds.

At the time Bold was dating his girlfriend of 5 years, Jamaican runner Mizicann Evans. But he found the perks of fame a little too hard to resist:

How did his girlfriend feel about it?

“We had one rule. If I was doing my thing with someone else and Mizz didn’t know, then she was cool. But if she found out that something had happened between me and another girl, then that person has to go.”

Rule? That’s just cheating, isn’t it? The couple has since split.

So could all those chicken nuggets and all that random sex have been the special ingredient to all that Olympic success? Or was it more to do with all the running and training and being a next level freak of nature?