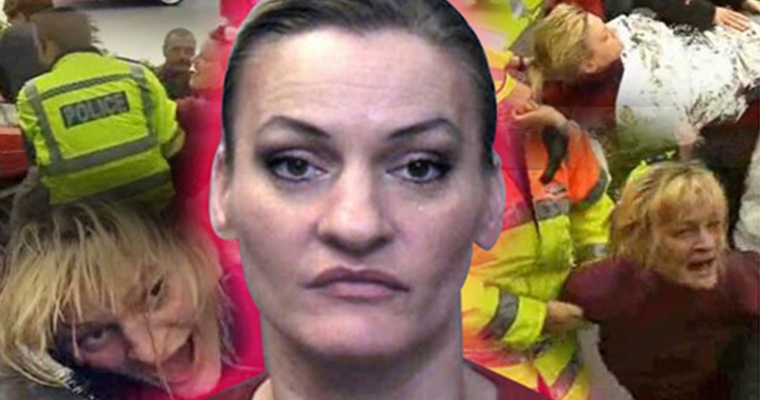 Have you ever seen Swedish twins run voluntarily into motorway traffic? You will in a minute…. confusing and frightening tales…..

This mental/ bonkers/ disturbing/ intriguing story happened back in 2008 but I recently came across some newer articles about it and thought it was well worth revisiting. The mystery still lives on. Even if you caught this the first time round it’s worth rereading. My jaw doesn’t often literally drop open. But it has dropped open and remained open during everything I have read about this. Here goes, I will try and summarise as briefly as possible, the unbelievable events of May 2008, there’s lots of holes and half truths it seems, but I’ll do my best.

Ursula and Sabina Eriksson are Swedish twins, they were on a bus from Liverpool to London and got off at a service station near Stoke, complaining that they felt ill. They were behaving weirdly, all sketchy and nervy and clutching their bags tight to their chests; So the bus driver wouldn’t let them back on the bus, due to bomb fears etc. They decided to start walking along the central reservation of the motorway and whilst trying to cross the motorway they caused themselves some minor injuries and some traffic mayhem. You can’t frig about on a motorway so the police got called. The police were talking to the women at the side of the road trying to work out why they were doing something so dumb, when out of the blue, Ursula ran straight in to the traffic and got mauled by an 18 wheeler; For no reason at all, Sabina did the same thing moments afterwards and bounced off the front of a VW Polo. Ursula’s legs were screwed so she stayed down. Sabina, however, after a brief spell of unconsciousness got back up, fought a police woman and ran in to the opposite lane of traffic. Despite being hit at about 60 mph it took six people to finally get her under control. 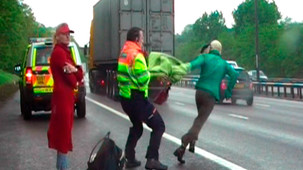 Thankfully for us sick voyeurs there was a BBC camera there for the duration as they were filming “Motorway Cops”. Honestly…. watch this. Mad as a badger, I bet your jaw drops too:

What happened next is even more mental…