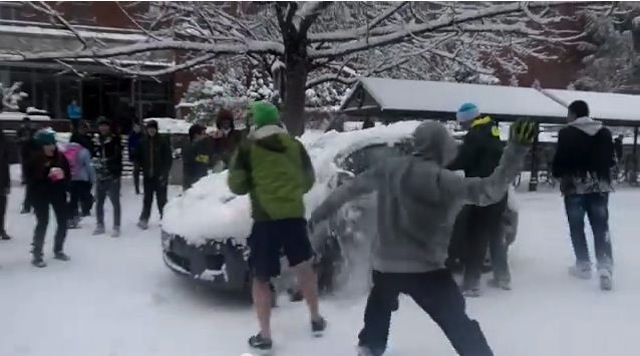 Did these uni students take their snowball fight too far? The police seem to think so.

Police are investigating whether this snowball fight at the University of Oregon in the States falls under the category of a criminal offence, after students spotted a lecturer’s car pulling up and decided to gang up on him with a full-on snowball attack.

At one point the lecturer opens his car door and gets a bucket full of snow to the face. Riding a wave of emotion from the injustice of the 20-on-1 attack, he seems to consider squaring up to a female student but thinks better of it in the end.

The uni released a statement afterwards saying: “Police hope to determine the identities of those who were throwing snowballs, whether they are UO students and whether their actions constitute a criminal act.”

“Consequences are clear for those whose actions reflect poorly upon the university of violate its standards for student behaviour.”

What do we think — too far?

â˜› Watch This Next: Don’t Bring A Snowball To A Water Fight